The Expendables 2 is easily the most visually murky theatrical release of the millennium. Perhaps that’s an intentional effect to disguise the aging appearance of screen idols now well into their sixties. Taking over the directing duties from co-writer/star Sylvester Stallone is Simon West, who amps up the frantic pace and allows for a more coherent picture story-wise than the first go around.

The entire crew is back, sans Mickey Rourke. The humor is played up and the violence is toned down, sure literally hundreds of lives are lost but nothing is as explicit as the opening scene of the first film in comparison. This time Stallone has wisely incorporated ‘new’ blood in ‘old’ martial arts stars Chuck Norris and Jean Claude Van Damme. Norris has essentially a cameo appearance that is played entirely as parody, complete with the Ennio Morricone strings on the soundtrack. He may carry a big gun but he speaks so softly it is nearly laughable.

Owing a financial debt to Mr. Church (Bruce Willis) from the fiasco in South America, Barney Ross (Stallone) and his team of mercenaries are forced back into action. This time the mission sends them to Eastern Europe in an attempt to retrieve sensitive materials stowed away in a safe located in a downed aircraft. Church assigns a female along for intel, which naturally doesn’t sit well with the chauvinistic Ross. The seemingly easy payday quickly goes awry, and the youngest member of the team (Liam Hemsworth) is murdered by a dangerous terrorist, Jean Villian (Jean Claude Van Damme). Van Damme steals the screen in his brief moments, and Stallone has wisely cast him in the right role. His quips and odd physical gestures make for a memorable screen presence, far more menacing than the weak latin general of the first film.

Now, what started as a simple snatch has morphed into a quest for revenge. This inadvertently puts the squad in the position to stop the illegal sale of five tons of weapons grade plutonium. All of this is played so broadly that the story is just a clothesline to hang some manic gun battles and macho posturing on. Sadly this series still hasn’t hit its stride or potential, a sequence featuring a village of female warriors is straight out of Corman territory. Even with all the action and star-power, both The Expendables and now it’s sequel feel like Stallone and company are picking low hanging fruit. Call me easily entertained but, I was undeniably and sometime unreasonably entertained. 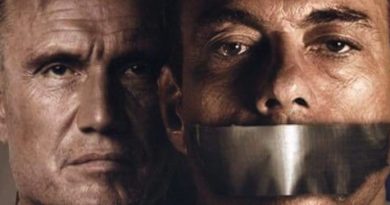