Killing Season begins with a great opening sequence, set during the Bosnian conflict of 1992. American special forces liberate a concentration camp, rescuing the imprisoned and mercilessly executing the opposing army. Colonel Ford (DeNiro) has fought bravely alongside his men, sustaining a debilitating injury to his left leg in the process. His last piece of business before leaving the war zone is taking part in the slaughtering of half a dozen enemy soldiers. All expired but one, Emil Kovacs (Travolta) who managed to survive a point-blank bullet to the back of the head.

Eighteen years later Kovacs has obtained the location of Ford’s remote cabin home and intents to stalk and execute the former military man, in the same fashion that he was treated two decades before. Ford is now a recluse hiding from the memories of the past both personal and professional. His newly parented son and daughter-in-law plead with him to make it to their young son’s baptism, only to be blown off by Ford because of his reluctance to see his ex-wife’s new lover.

Isolated and disgruntled, Ford runs into car trouble but is helped by an odd European man claiming to be in the area hunting Elk. The man reveals that he is a Bosnian native and Ford quickly sense that the stranger is hiding something. Thankful for the mechanical help, Ford invites the mysterious traveler to his cabin for refugee from the gathering thunderous storm. Leading to a talky sequence in which the two former soldiers discuss war, drink lots of jagermeister, discuss the existence of god, and drink more jager, until finally it is apparent to everybody but Ford that the stranger is Emil Kovcas.

The two make plans to rendezvous at dawn to track and kill an Elk, things turn ugly and Kovacs offers his true identity and intentions to Ford. Thrusting the two older thespians into a cat and mouse chase ’em game that stops for plenty of further discussion of god’s role in war, the importance of honor and family and a number of other things that teeter between heavy-handed and sure-footed. That the film steadies itself and doesn’t lapse into parody is a credit to the craftsmanship of director Mark Steven Johnson. The screenplay is far more cerebral and ambitious than most action films released under the Millennium Film production banner. Killing Season may not be the most effective use of these fallen icons talents’, but it’s a whole lot better than it should be, and nowhere near the worst in either’s filmography. 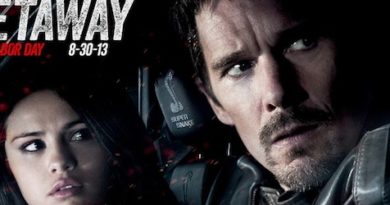