Don ‘The Dragon’ Wilson’s franchise Bloodfist continues under the Roger Corman releasing banner. Wilson returns to the screen as Jake Raye and although the character sports the same name as his character from the first film, Raye seems to be a completely different person. When the original picture opened Jake has retired from competing in Kickboxing matches due to donating a kidney to his younger brother. This time around Raye is not only fighting, he is the reigning World Champion.

Like most martial arts pictures this film opens in the midst of a brutal fight taking place. Defending Champ Jake Raye is administering a royal beating to his inferior opponent. In a desperate attempt to win the combatant takes a drug to enhance his strength, the crazed fighter keeps getting put down but spring right back up. Jake throws a devastating blow that kills the fellow contestant in the ring. He vows from there out to never fight again, that is until a late night call from an old sparring partner brings him to the Philippines and into a deadly tournament spearheaded by a madman.

A mysterious woman lures Jake into a trap that results in his incapacitation. He awakens at sea, chained to a half-dozen other martial artists, headed to an island compound run by Su, who is showcasing his genetically enhanced fighters against the world champions in various fighting forms.

The template is Bloodsport and Enter the Dragon, and Bloodfist follows the playbook closely. Even for a Roger Corman production this film looks cheap, from the overused single fighting location to the size of the crowds gathered to watch the matches, budgetary restraint are evident in almost every shot. That does add a certain B-movie appeal to the production. Don Wilson is as stiff and unappealing as ever in the lead role, still this sequel is better than the original, but it wouldn’t be until Bloodfist 3 that the series would finally hit its stride. 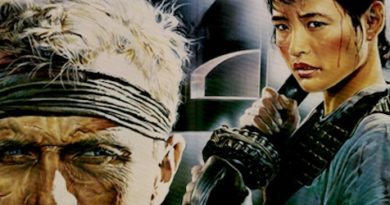