Burt Reynolds is back in a semi-sequel to his 1981 hit Sharky’s Machine. This time his character is the similarly nick-named Churchy and once again he’s teamed up with Bernie Casey playing a fellow officer. Liza Mannelli is cast as the female love interest, but her chatter-box hooker with a heart of gold (and no STDs) is out of a 1940s screwball comedy. She totally mis-plays the part, but hey at least she tries which is more than can be said of the tired performance from Reynolds, who seems to have realized he was appearing in a stinker halfway through and then just gave up.

Set in Chicago (but filmed on the cheap in Italy) Detective Tony Church is the lead on a hotel drug bust that goes fatally awry, causing the slaughter of a handful of his fellow officers and two million dollars in the hands of the Assassin (James Remar). The only living witness to the massacre is Delta Roberts, a call-girl who happened to be working the adjacent room to the murders. In the fall-out from the department investigation, Church is suspected of profiting from his partner’s death. Kicked of the force and teaming with Roberts, Church must navigate the clutches of a psychotic killer and keep alive the sole eye-witness to the case.

Rent-a-Cop is another in a string of mediocre Burt Reynolds pictures, this movie does nothing to elevate his screen legacy like some of the comparable Eastwood films. Instead it actually brings to the fore-front most of the negative stereo-types his detractors claim. There are some nice moments between the beleaguered Church and the talkative Roberts but their love-story is so implausible and the score by Jerry Goldsmith presents us with a love theme that recalls daytime soap opera jingles at their least affecting. I think it’s quite obvious at this point, I think Rent-a-Cop is one of the worst films of 1987. 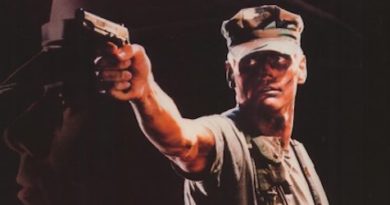