The Delta Force trilogy comes to a limp conclusion in this tacked-on installment that features a cast of Hollywood siblings including absent series star Chuck Norris’ son, among others. There is no explanation why this movie has been decreed as part of the Norris led Delta Force flicks, other than to capitalize on the internationally recognized brand. This is especially disappointing considering that Delta Force 3 was released by the Cannon films label which had launched the first two installments into globally renowned jingoistic action fantasies. At this point the producers were robbing their own franchises to scrap together a buck for the next project. It may have worked in the short-term, but that Cannon logo that once stood for upper echelon guilty pleasures had been reduced to a warning sign from jilted consumers.

Frequent Cannon films collaborator director Sam Firstenberg tries to make sense of a nonsensical script and give energy to an absolutely miscast group of ‘actors’. The plot introduces a new team of elite commandos led by Charlie (Nick Cassavetes), who must be assimilated with a group of Russian soldiers. Orders from the Pentagon mandate the joint operation to take down a mad-man in the Middle East, who is intent on setting off a bomb during live television.

The pairing of Eastern and Western military forces has been done to death and better in almost every other film of the ilk, including Iron Eagle II. A female Russian Intelligence officer (Hanna Azoulay Hasfari) is used as bait to assassinate a General and the story sets-up a love affair between her and Charlie, but is then quickly dropped. Nothing gels in this picture, scenes are well-shot but clunky and tension is never mounted in any interesting manner. The only aspect of the movie that is remotely memorable is the intriguing idea of using a live news broadcast as the platform for terrorist activity. Plus the sight of actor and Cannon regular John Saint Ryan, who resembles Sean Connery. 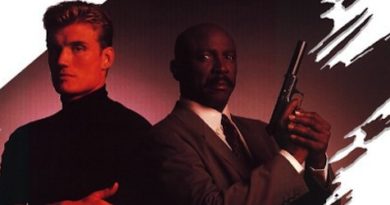