Pierce Brosnan takes the lead after the franchise was dormant for a record six years, bringing our venerable hero into the modern-age of computer warfare, and shaky post cold-war alliances. Goldeneye the 17th Bond film, is an unwieldy beast that sparkles with touches of spectacular filmmaking, but also lumbers through an unworthy third act. John Barry’s iconic theme has been interpreted by David Arnold, the musical score and title track are both duds. Many aficionados site this entry as the best of the Brosnan bond films, I can’t count myself among that opinion.

As the picture opens Bond (Pierce Brosnan)is being tested for aptitude by a female doctor, they are enjoying a spirited ride through the countryside, when a gorgeous vixen in an exotic sports car challenges him to a race. This leads to a well-choreographed chase through Monte Carlo, one of the film’s many heightened chase sequences. Later, Bond uses a tank to troll the streets of St. Petersburg in pursuit of a villainous Russian general.

Judi Dench makes her first appearance in the series as M. Her dismissal of Bond’s practices as antiquated give way to his unquestionable results. This time out Bond is out to stop a crazed Military leader, a former 00 agent (Sean Bean), and his female bodyguard, all intent on using satellites to rob the Bank of England before erasing its financial records, thus destroying Britain’s economy.

These movies rise and fall based on their villains, outside of the memorable Xenia Onatopp (Famke Janssen), the bad guys are not compelling enough for a Bond flick. Vendettas and bank robberies are too-low scale for the plot to work. Also Martin Campbell has not found an interesting way to film the hacking sequences, the movie slows to a grind on several occasions, disrupting the excitement of the previous action segment.

However, Brosnan is good in the role which he appears to have been born to play. His medium built doesn’t suggest cold-blooded killer, but rather mischievous minded banker. As with the Dalton Bond’s there is a curious lack of sex in Goldeneye. Sure, Bond beds two women, but in comparison to the Connery days; this Bond is nearly celibate. I enjoyed the pumped up pre-title sequence and the exhilarating chases in various countries, but Goldeneye is too sluggish at 130 minutes. 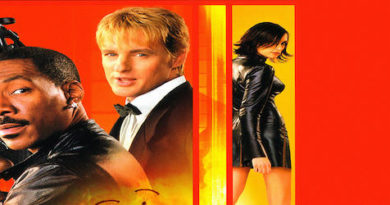