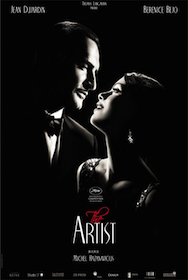 Michel Hazanavicius’ stylistically daring, dialogue-free comedy-drama The Artist stars Jean Dujardin as George Valentin, a matinee idol in Hollywood before the dawn of talkies. His marriage is far from perfect, and one day he meets ambitious chorus girl Peppy Miller (Bérénice Bejo) and is smitten. Very quickly thereafter, sound comes to movies, and George sinks all his money into one last epic silent film, while Peppy becomes a star in the new era. John Goodman co-stars as the head of the film studio working with Valentin. 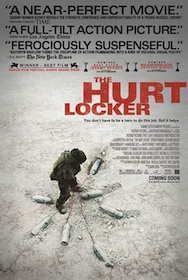 Based on the personal wartime experiences of journalist Mark Boal (who adapted his experiences with a bomb squad into a fact-based, yet fictional story), director Kathryn Bigelow’s Iraq War-set action thriller The Hurt Locker presents the conflict in the Middle East from the perspective of those who witnessed the fighting firsthand — the soldiers. As an elite Army Explosive Ordnance Disposal team tactfully navigates the streets of present-day Iraq, they face the constant threat of death from incoming bombs and sharp-shooting snipers. In Baghdad, roadside bombs are a common danger. The Army is working to make the city a safer place for Americans and Iraqis, so when it comes to dismantling IEDs (improvised explosive devices) the Explosive Ordnance Disposal (EOD) crew is always on their game. But protecting the public isn’t easy when there’s no room for error, and every second spent dismantling a bomb is another second spent flirting with death. Now, as three fearless bomb technicians take on the most dangerous job in Baghdad, it’s only a matter of time before one of them gets sent to “the hurt locker.” Jeremy Renner, Guy Pearce, and Ralph Fiennes star. 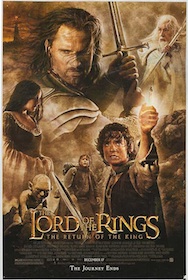 The Lord of the Rings: The Return of the King brings Peter Jackson’s mammoth adaptation of J.R.R. Tolkien’s classic to a close in suitably epic fashion. Instead of starting just where the previous film left off, however, it goes far back in time to the moment the tormented creature Gollum first came to possess the One Ring. In this flashback, actor Andy Serkis (who voiced Gollum and performed his movements onset prior to the final CGI effects) finally gets to appear onscreen, portraying Gollum’s former self, Sméagol. This disturbing scene serves as a potent reminder that the Ring seeks to corrupt even the well-intentioned Frodo (Elijah Wood), who is increasingly struggling with the dark power of the Ring himself.Released in December 2003, The Return of the King topped even its massively successful trilogy predecessors at the box office, and went on to garner a whopping 11 Academy Awards, including Best Picture — winning in all the categories in which it was nominated and tying the record of total awards won with Ben-Hur and Titanic. 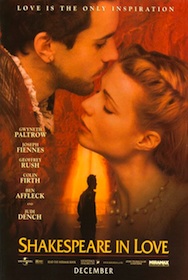 William Shakespeare (Joseph Fiennes) is on a cold streak. Not only is he writing for Philip Henslowe (Geoffrey Rush), owner of “The Rose,” a theatre whose doors are about to be closed by sadistic creditors, but he’s got a nasty case of writer’s block. Shakespeare hasn’t written a hit in years. In fact, he hasn’t written much of anything recently. Thus, the Bard finds himself in quite a bind when Henslowe, desperate to stave off another round of hot-coals-to-feet application, stakes The Rose’s solvency on Shakespeare’s new comedy, “Romeo and Ethel, the Pirate’s Daughter.” The problem is, “Romeo” is safely “locked away” in Shakespeare’s head, which is to say that not a word of it is written. Meanwhile, the lovely Lady Viola (Gwyneth Paltrow) is an ardent theatre-goer — scandalous for a woman of her breeding — who especially admires Shakespeare’s plays and, not incidentally, Bill himself. Alas, she’s about to be sold as property into a loveless marriage by her mercenary father and shipped off to a Virginia tobacco plantation. But not before dressing up as a young man and winning the part of Romeo in the embryonic play. Shakespeare soon discovers the deception and goes along with it, using the blossoming love affair to ignite his muse. As William and Viola’s romance grows in intensity and spirals towards its inevitable culmination, so, too, does the farcical comedy about Romeo and pirates transform into the timeless tragedy that is Romeo and Juliet. 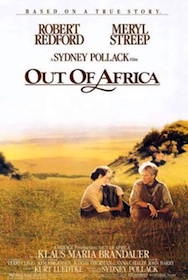 Out of Africa is drawn from the life and writings of Danish author Isak Dinesen, who during the time that the film’s events occured was known by her married name, Karen Blixen-Flecke. For convenience’s sake, Karen (Meryl Streep) has married Baron Bor Blixen-Flecke (Klaus Maria Brandauer). In 1914, the Baron moves himself and his wife to a plantation in Nairobi, then leaves Karen to her own devices as he returns to his womanizing and drinking. Soon, Karen has fallen in love with charming white hunter Denys Finch Hatton (Robert Redford), who prefers a no-strings relationship. A woman who prides herself on her independence, Blixen finds herself unhappily in thrall to a aloof man — and doubly unhappy for living out such a cliché situation. Although Redford received a lion’s share of criticism for his too-American performance, Streep has rarely been better, and the film’s perfectly measured pace is offset by David Watkin’s stunning location photography. The movie was nominated for 11 Academy Awards and won 7, including Best Picture, Best Director for Sydney Pollack, Best Adapted Screenplay for Kurt Luedtke, and Best Cinematography for Watkin.