Starship Troopers’ middling performance at the box-office in the winter of 1997, is one of the more puzzling failures in the modern era of sci-fi blockbusters. This is a film made with intelligence, wit, a sardonic sense of humor, laced with homage and satire, and equipped with astounding special effects. That is to say there is something for everyone in this extremely engaging futuristic war tale. Rebounding from the debacle of Showgirls, director Paul Verhoeven delivers another classic to the genre, which would also serve as the last good film in a career of varying degrees of success.

Like Star Wars, this tale centers around an idealistic and independently minded young-man eager to leave his home planet and join military service. Unlike, that earlier space opera Starship Troopers starts as a high school coming of age film straight out of the 1950s, complete with the big game and some prom night romance. Then the four leads, Johnny (Casper Van Dien), Carmen (Denise Richards), Desi (Dina Meyer) and Carl (Neil Patrick Harris) enlist in the Federal service which sends them to duty amongst the outer rings. Johnny quickly becomes squad leader of his mobile infantry division, until a training exercise gone awry sees him publicly punished and nearly dropped from the program.

At the moment when our hero is about to quit, the dastardly ‘Bugs’ of the planet Klendathu fire a gigantic meteor at Earth, causing millions of casualties and wiping Central America off the map. This sneak attack, in the pre 9-11 context, feels like a reference to the Japanese bombing of Pearl Harbor. The mobile infantry is assembled and Johnny is among the first wave to hit the ground on the desert planet that the enemy insects occupy.

The insects are two-stories tall and move with the speed and precision of a cheetah, they are singularly minded and are capable of killing in a number of horrific ways. These creatures are some of the most visually inventive movie monsters to inhabit the screen since T. Rex rampaged through Jurassic Park.

Starship Troopers is superior entertainment, a sci-fi spectacle of the highest order. This is a film rich in ideas, humor, and B-movie exuberance for gung-ho violence. Now, nearly twenty years after the original release, the special effects and more importantly the story still hold up against its long forgotten peers. 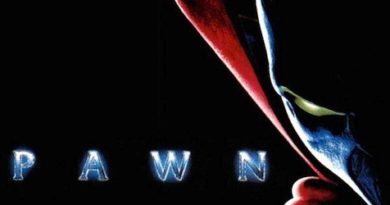