Uwe Boll is a well known and prolific movie director, writer and producer. Dr. Boll is best known for directing many feature films based on video games such as Alone In The Dark, BloodRayne, In the Name of the King: A Dungeon Siege Tale, Postal and Far Cry. He recently took a short break from his busy schedule for his second chat with MovieMavericks.com 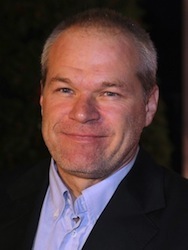 Jason: I recently viewed In the Name of the King 2, and I was pleasantly suprised at the much lighter tone. The first film was more of a straight forward fantasy and the sequel featured a smirking anti-hero as the lead character.

Uwe Boll:I recognized I would not have the massive budget I had on the first. I was making a sequel with a lot less money and I had an actor of Dolph’s caliber, he is more of a cynical type of guy, someone who is a short-talker, and ironic. He’s definitely out of place in the medival times. With the sequel its action/fantasy with a twist. Of course he has to save the kingdom and it has to be a follow up to the first. This entry is set fifty years after the events of the first film, but we decided to play up the upsurdity of the story. Dolph’s character is transported from the current time back to the medival age. We had some fun developing the script, thinking of practical ideas like, you’re in King Arthurs time, but where the fuck is the toilet? Or, what water do you drink when it’s 100% unfiltered? I think Dolph’s dryness helps selling this.

J: Your recent films have been extremely violent due to their serious subject matters, INTK 2 is far more toned down. Was this on purpose?

UB: The first one was PG 13, and this new one is rated R, I felt because of the dragon sequence that kids may be attracted to this movie. I knew that I couldn’t come in with rampage or dafur level if violence. We decided to show less blood and gore, I believe it was a good decision because Fox is very pleased with the DVD sales, and it looks like the movie is a success.

J: Will we see a part Three?

UB: It depends on how much they pay out to me (laughs). I would have to see what the worldwide results are. It has premiered in the US and Canada, with many territories coming afterwards. In England and Germany they have a 3D version of the movie. I couldn’t convince Fox to release a 3D version in the US. I had a company post-convert it and it looks really good, particularly the dragon breathing fire. I’m curious to see how the 3D version does in Europe, those factors will determine if there is a part three.

J: Would you stay with the Dolph Lundgren character? Or would this be a separate adventure?

UB: I would love to work with Dolph again but you never know if he would do it for the same price again. I would be happy to have him as the lead and continue working with him.

J: Can you explain your working relationship with Mr. Lundgren? Your collabration produced a great result, how did that come about?

UB: Dolph hadn’t made many period pieces, we met and i think he could sense that i had an ironic sense of humor too. He also speaks German so we talked a lot and I recognized that he is way more intelligent than other action heros. Steve Austin and Randy Couture are nice guys, but are they deeply intelligent? Dolph was a mechanical engineer so his brain is far more intellectual. The parts he usually plays aren’t matched to his actual capacity. We had good chemistry and a fun time on set. However he was suffering from an injury that prevented him from being able to run. In our movie there were scenes that were very painful for him to do, but overall it was great.