If John Grisham ever penned a YA novel and Oliver Stone adapted it for the screen, it would look and play a lot like Paranoia. This is an example of a perfectly mediocre movie. It’s a corporate-thriller b-movie with an A-list cast hamming it up. Slick visuals and a pulsating score unsuccessfully attempt to elevate this routine material.

Adam Cassidy (Liam Hemsworth) is a brilliant young talent working away fruitlessly under the tutelage of tech magnate Nicolas Wyatt (Gary Oldman). After being demoted and fired Adam takes his co-workers out on the company’s expense account. He racks up a $16,000 tab. This comes to the attention of Wyatt, who proposes jail time or a bit of industrial espionage by molding Adam into become a corporate spy to obtain industry secrets from a rival company run by Jock Goddard (Harrison Ford), Wyatt’s former business associate.

Initially, Adam finds that he likes the theories and practicality that Goddard embodies. The job also has it perks financially and the lovely female executive (Amber Heard) is an obvious love interest. Before long the FBI are snooping around Adam’s residence and tailing his whereabouts. The clever spy-game has gone from assignment to life or death. Adam is caught in the middle of two tech titans that are willing to do anything in order to topple the other.

Paranoia has obviously been inspired by films like Wall Street, The Firm, and Boiler Room. The difference is those films were top lined by venerable thespians, Paranoia is anchored by the lightweight screen presence of Liam Hemsworth. He’s a good-looking guy but, he doesn’t possess the charisma to lead a film. Ford is ok in a strange career choice. Gary Oldman is a live-wire, speaking in a cockney accent and chewing up the scenery, he seems to be doing his best Michael Caine impression and the only actor in the ensemble to get the tone right. Paranoia is the kind of movie Hollywood dumps into theaters during the bare-bones late summer weeks. It’s harmless but inconsequential too. 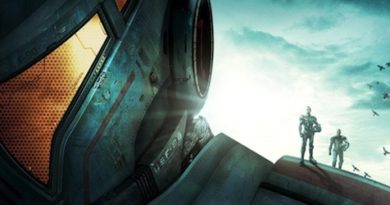