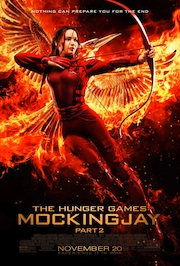 Episode two-hundred and eighty-nine. Join hosts Trevor and Jason as they discuss the latest in movie news, box office numbers and trailers.


Box Office Ace Predictions: The Hunger Games: Mockingjay – Part 2, The Night Before, The Secret in their Eyes

Trivial Trivia:
Terrified by the new threat of piracy, Universal had the video cassettes made from green plastic. It obviously worked, as the release broke home entertainment records. Name the Movie?