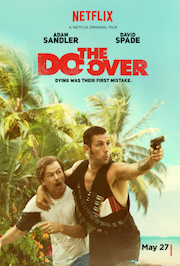 Episode Three hundred and One. Join hosts Trevor and Jason as they discuss the latest in movie news, box office numbers and trailers.


Trivial Trivia:
Which 1993 action-comedy was originally intended as a sequel to Kindergarden Cop?

“I wrote a 62-page treatment with my friend Chuck for “Lethal Weapon 5” that would’ve been, I think, a very good movie. It was interesting. It was essentially an older Riggs and Murtagh in New York City during the worst blizzard in east coast history, fighting a team of expert Blackwater guys from Afghanistan that’s smuggling antiquities. And we had a young character that actually counter-pointed them. But I didn’t wanna do what people do when they’re trying to transition which is, they sorta put the two older guys in the movie, but really it’s about their son! And he’s gonna take over and we’re gonna do a spinoff. Fuck that, if they’re gonna be in the movie, they’re gonna be in the movie — I don’t care how old they are.”

Reviews:
Neighbors 2
Line on the Line
Pride and Prejudice and Zombies
Gods of Egypt
Triple 9
The Night Before

Streaming Online Pick of the Week: