Cinematically speaking;The heyday for the ninja was during the 1980’s. Propelled by Cannon films, the decade had 7 titles released relating to the deadly art of ninjitsu. The ancient assassins became so iconic that Halloween costumes and toy ninja stars were widely available. Then the fascination with ninja’s gave way to the likes of Seagal, Van Damme, and Speakman. Which effectively turned the attention to unmasked heroes and villains, and banished the ‘ninja film’ back into obscurity. After having turned the Martial Arts genre on its head with The Matrix the Wachowski Siblings have brought ninjas back to the big-screen.

When his best friend is murdered by the shadowy Ozuna clan, Raizo (Rain), an orphan raised to be an assassin,vows revenge. But a government agent (Naomie Harris) who is trying to expose the clan, gets in the way of Raizo’s vengeance, and now, the two must work together to bring the Ozunu to justice. The pair flee across Berlin as the Clan’s professional assassins pursue.

Rumor has it that the screenplay was hammered out in a weekend to due an impending writer’s strike and a set shoot date. That would explain the simplicity of the plot, dialogue and narrative structure, but making the film an overly gory and utterly boring experience is a sin to be shared by all those involved. Directed by James McTeigue, with none of the restraint and wit he brought to V for Vendetta. 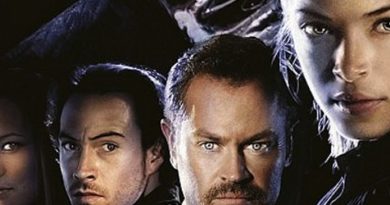