Weekend at Bernie’s has garnered a cult following over the years, that same adoration has never extended to the sequel, Weekend at Bernie’s II. This cash in attempt to capitalize on the minor success of the original is the clear intention of this brainless follow-up. Lacking laughs, but retaining a sweet nature–even when dealing with a rotting corpse–and pleasant enough to make 90 minutes breeze bye, Bernie’s II is a forgettable comedy that has rightly been forgotten.

After returning from vacation with their recently deceased boss, Bernie Lomax (Terry Kiser); Larry Wilson (Andrew McCarthy) and Richard Parker (Jonathan Silverman) find themselves blamed for Bernie’s theft of two million dollars and promptly fired. An investigate into Lomax’s business affairs revels hidden assets somewhere in the St Thomas Virgin Islands. Meanwhile, a voodoo witch doctor Mobu (Novella Nelson) sends two afrocentric henchmen, Henry (Steve James) and Charles (Tom Wright), to New York with orders to retrieve Bernie’s body which is to be used in a voodoo ceremony to reanimate him. The witch wants to revive Lomax so he can guide her to his hidden money. Unbeknownst to Richard and Larry, a company security officer, Arthur Hummel (Barry Bostwick) who believes Larry and Richard knows where the money is, is also on their trail. Now it’s a rat race to the hidden treasure, as the three groups try to outsmart each other, and claim the prize in the end.

Literally, the only amusing element in the entire film is that Bernie can only move when he hears music, a gimmick that becomes tired very quickly. The rest of the story is so flimsy that it’s too lazy to even supply Larry with a proper love interest. Meanwhile, Richard’s girlfriend from the first movie is curiously absent which is even stranger since this is a direct continuation of the original. Steve James–always welcomed in any movie–and Tom Wright bumble around and generally act foolish to little comedic effect. Weekend at Bernie’s II is a softer, dare I say, more family friendly chapter fashioned in the hopes of reaching the widest audience possible. This time around Bernie’s D.O.A.. 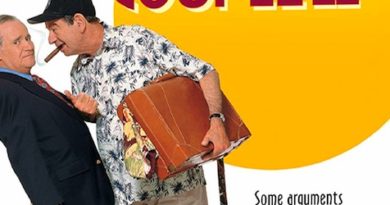