At 79 years old Ridley Scott is still making muscular, kinetic films. Any new Scott picture should be seen because he’s a master of technique and visual design. So it’s a bit depressing to witness Scott ape himself in Alien: Covenant, the eighth entry into the Aliens franchise, he’s now beholden to the genre tropes that he himself established back in 1979. Like it’s predecessor Prometheus this latest foray into the nightmarish world of Xenomorphs, the Weiland Corporation, and claustrophobic spaceship interiors is more interested in its machines and hardware than it’s mechanically written human characters.

The crew of the colony ship Covenant (Katherine Waterston, Billy Crudup, Danny McBride) are en route to the depths of space to start life on an uncharted planet. Once on the exotic paradise the members of the expedition come into contact with David (Michael Fassbender), an android who has managed to survive in the desolate environment. Before long the series repetitive nature begins and the Alien creatures begin to pick off the crew members one by one. Alien Covenant is basically Deepwater Horizon in space. Both feature blue-collar workers under orders by corporate mandates to perform a task that will ultimately take their lives. If watching working-class characters getting picked off systematically is your idea of entertainment than Alien Covenant should provide many thrills for you.

The mysterious world soon turns dark and dangerous when a hostile alien life-form forces the crew into a deadly fight for survival.
As this prequel trilogy progress I’ve come to the realization that the more the filmmakers explain the origins and motivations of the existence of the Aliens and their creators it’s becoming less interesting. There is no sense of wonder or awe in this seventh sequel to the original hit. It is curiously content with telling an unnecessary and small story that only occasionally justifies itself with flashes of brilliance. Alien: Covenant is slavishly devoted to the original film, but that only proves there is nothing new to see here. 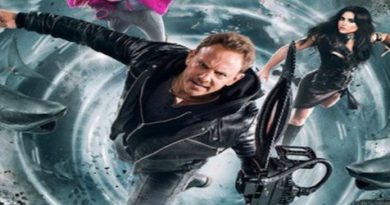 New Rise of the Plant of the Apes One Sheet