“We live in a world that’s full of risk.” One character utters in the new John Travolta thriller The Poison Rose. And as of late, viewing the latest output from the once Hollywood giant is a risky endeavor in itself. Perhaps the most outlandish element of this indie noir thriller is that it asks us to believe Travolta could be a former NFL legend turned private investigator. Now, he is a very talented actor and is often the best aspect of the junk film he’s been stuck making for the last five years, but he never feels right in the role of a grizzled down on his luck gumshoe. Writer/Director George Gallo (Who’s had a wildly erratic track-record) delivers a compelling story that is executed with intelligence and attention to detail but drags when it should be ramping up.

Carson Phillips (John Travolta), is a hard-living retired athlete with a large appetite for his vices, which are plentiful. He spends his days in a semi-stupor but officially is a private eye in Hollywood. Phillips is a tough guy who likes liquor, gambling, and women. Then one day a job appears, Phillips takes a gig that requires him to travel to Texas. Once there, he is tasked with uncovering the truth about the death of a standout high school quarterback.

The Poison Rose has been directed by three filmmakers and the movie works better than it should with that many different creative leaders. The cast is filled with familiar faces and after a while, I started to think that a documentary of these actors discussing the industry would be far more interesting than anything happening onscreen. I guess The Poison Rose is somewhat notable for the pairing of John Travolta and Morgan Freeman. It’s the first time that these actors have appeared together onscreen after 200 combined movies. The Poison Rose won’t insult you or bore, but it’s most likely to be remembered as a trivia question. 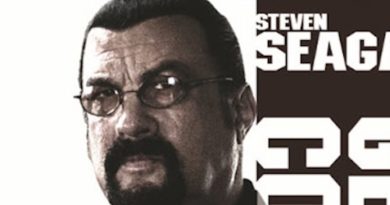