Liam Neeson has stated that Cold Pursuit will be his last action film. At 68 years old the venerable actor says he’s grown tired of the genre that revived his sagging career in 2008 with the sleeper smash Taken. If he stays true to his word, Cold Pursuit is the last in a series of entertaining action/thrillers, then at least he’s going out on high note.

Nels Coxman’s (Liam Neeson) quiet life as a snowplow driver comes crashing down when his beloved son dies under mysterious circumstances. His search for the truth soon becomes a quest for revenge against a psychotic drug lord named Viking and his sleazy henchmen. Transformed from upstanding citizen to coldblooded vigilante, Coxman unwittingly sets off a chain of events that includes a kidnapping, a series of deadly misunderstandings and a turf war between Viking and a rival boss.

Cold Pursuit has a dark irony within the storytelling and the black humor is a welcome surprise. There is a lot more going on then appears at first and it’s to the filmmakers credit that the movie grows more involving as it progress. Neeson is convincing in his role that it’s easy to overlook the subtle acting in some of the films’ quite scenes. He gives a great performance in an exceptional action/thriller with a macabre sense of fun. 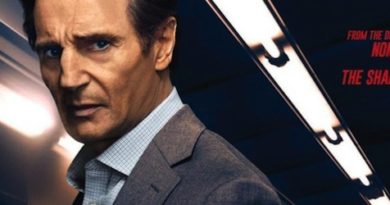