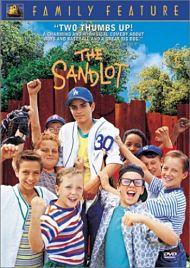 10. THE SANDLOT (1993) – This unlikely box-office hit is fondly remembered by children of the nineties and their baby boomer parents. The film is set in the early 60’s and tells the story of a new kid to the neighborhood and his need for acceptance. This eventually comes through his experiences on the sandlot baseball field. Anyone familiar with the plight of retrieving a ball from a neighbor’s backyard will recognize the authenticity director David Evans infuses into this great film.

9. BLEACHER BUMS (2001) – Based on script written in 1979 for the stage, the entire film takes place in the bleachers of what is supposed to be Wrigley Field. Since this was a TV movie, MLB wouldn’t sign off on the project, that’s why our characters are watching the Chicago Bruins instead of the Cubs. The story follows a group of hardcore fans that include Brad Garrett (Everybody Loves Raymond) and Peter Riegert as two professional gamblers, with the latter playing daddy to a pair of disinterested sons. Wayne Knight of Seinfield fame is a far less successful gambler with a pissed-off wife who is fed up with his addiction. There is also a blind man who enjoys hearing the game and having it described to him by his female companion, who is just trying to get on television and “be discovered,” like Pamela Anderson. Rounding out the group are two wise old scorekeepers. The film isn’t about the game but the role it plays in these people’s lives. An excellent look at the feverish worshiping of sports in our culture. Makes a great double feature with the 2009 film Big Fan, which covers much of the same territory.

8. COMRADES OF SUMMER (1992) – This HBO film premiered in July of 1992 right in time to capitalize on the Olympic Summer games in Barcelona. Joe Mantegna is Sparky Smith the obnoxious slob manager of a major-league team. While filming a TV commercial, Smith is injured and promptly fired by the spiteful owner of the club. Sparky quickly vanishes into obscurity until he is approached to coach the Russian Olympic baseball team. Out of options he accepts and is faced with the task of teaching America’s pastime to the commies. Think of it as a cross between Mr. Baseball and Bad News Bears. A little gem of a film and somewhat rare, since it was a cable premiere this title is extremely difficult to find on video or DVD. Worth seeking out.

7. EIGHT MEN OUT (1988) – Veteran writer/director John Sayles brings his formidable talents to the story of the 1919 Chicago White Sox Scandal. A young John Cusack is excellent in this absorbing drama, as one of the eight men singled out for throwing the World Series. Equally strong is David Strathairn who portrays pitcher Eddie Cicotte, a man nearing the end of his career who feels the needs to insure a financial future for his family and take revenge on his boss. A mesmerizing look at the unthinkable betrayal of the national pastime.

6. 61* (2001) – Longtime New York Yankees fan Billy Crystal directs this handsomely designed film that premiered on HBO during the height of the steroid as-trick era. Central focus of the film is on the home run chase between hard partying womanizer Mickey Mantel, and conservative family man Roger Maris. Thomas Jane and Barry Pepper play the legends and they create a nice onscreen chemistry, you can understand how these two opposites could be such close friends. The fever pitch surrounding the breaking of the single season home run record is handled convincingly and draws the viewer into the fever. Side Note: McGwire and Sosa would break Maris’s record as this film was in production.

5. LITTLE BIG LEAGUE (1994) – 12yr old Billy Heywood is bequeathed the Minnesota twins by his deceased grandfather, his first order of business is to fire the old coach and take over the job himself. This causes a major rift with his players who don’t want to play for a child. That is until the kid shows the stars that baseball is about having fun and playing with your buddies, not money and statistics. A totally outrageous premise is made somewhat legit by the appearance of real life athletes including Ken Griffey Jr. and Randy Johnson. A number of musical montages highlighting the teams winning streaks add to the fun. Sure to bring out the little leaguer in anybody who’s ever put on a mitt.

4. THE FAN (1996) – Baseball’s $40 million dollar man is being stalked by his biggest fan. Wesley Snipes is Bobby Rayburn the game’s highest payed player. Robert De Niro is a former knife salesmen who begins an unhealthy fascination with the athlete. The picture is slickly photographed around the San Francisco Bay Area, and director Tony Scott brings his high gloss style to the proceedings. The best scene in the film is a midnight beach showdown between Star and dangerous fanatic. It’s Travis Bickle-lite for De Niro, but Snipes delivers one of his best performances as the arrogant slugger fashioned after Giants outfielder Barry Bonds. Story goes off the rails in the third act: this may be the first film to end with a shootout on a baseball diamond.

3. FIELD OF DREAMS (1989) – Arguably the most famous baseball film of all time. The line “If you build it, he will come”, has become part of pop culture. It’s easy to forget how emotionally gripping this picture is. Kevin Costner is pitch-perfect in the role of Ray Kinsella, the Iowa farmer who converts his cornfield to a ball field. This draws the ire of the townsfolk but provides a field for the ghosts of the 1919 White Sox’s to play on. Only hitch is Costner’s family are the only ones who can see them. The film is Capra-esque in it’s view of little town mentality and the purity of America’s game. A haunting musical score by James Horner and stunning photography by John Lindley adds to the magical quality of the picture. Anyone who isn’t teary-eyed by the end titles should have their pulse checked. A masterpiece of American cinema in a decade not known for such.

2. MAJOR LEAGUE (1989) – The Sting scribe David S. Ward concocted this rowdy baseball comedy that is the Animal House of sports films. It’s a showcase for stars Charlie Sheen, Wesley Snipes and Tom Beringer as the key members of a misfit squad made up of has-beens and never-will-bes. Almost stealing the show is Bob Uker as broadcaster Harry Doyle, his line “just a bit outside” is mentioned nightly whenever MLB pitchers throw a wild pitch. The script is filled with so many great lines (“It’s too high”) and memorable scenes (Joebo worshiping by Cerrano) that it would take this whole column to list them. Just try and listen to ‘Wild Thing’ and not picture Charlie sheen on the pitching mound. Incidentally the song gained a new found popularity after the release. Unfortunately the box office success of the film led to two crummy sequels. This is a classic that has aged beautifully. Little know fact: When Willie Mays Hays comes up to the plate for the first at bat of the season, Harry Doyle states that he believes the season can be reflected on how well the first batter does. Hays bunts a ball and gets on for an infield single. Jake Taylor does the exact same thing in the final game.

1. FOR LOVE OF THE GAME (1999) – Sam Raimi, director of the Spiderman films, isn’t the first name that you’d think of when it comes to making a sports movie. However, Raimi is a lifelong Red Sox fan and the films title may suggest why he chose to take on this project. The story takes place over the course of one game. It’s the final start in the career of washed up veteran pitcher Billy Chapel. As he takes the mound at Yankees’ stadium he begins to reflect on the events in his professional and personal life that have gotten him to where he’s at. The film cuts between the action in the game and the events in his past. These transitions are handled masterfully by the strong hand Raimi brings to the picture. Working from an excellent if sometime too sentimental script by Dana Stevens, both Costner and Raimi are at the absolute top of their games. The best film in the Kevin Costner ‘Baseball Trilogy’ and my all time favorite film focusing on our national pastime.