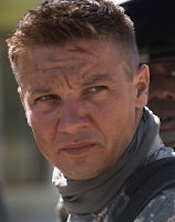 After months of speculation and a lengthy screening process Universal Pictures looks to have tapped rising star Jeremy Renner to take on the lead in ‘The Bourne Legacy’. Although it’s not a direct sequel to the previous films and Renner won’t be playing Jason Bourne, the story takes place within the ‘Bourne Universe’. The trilogy of Bourne films grossed almost a billion dollars worldwide and turned Matt Damon into a viable action heavyweight. Renner will play an agent in a covert government agency involved in tracking Bourne, Damon will not be reprising his role but his character will be a major presence in the storyline as the title suggests. This marks the second possible franchise for Renner, he will next be appearing in ‘Mission Impossible:Ghost Protocol’ due out in Dec. 2011.