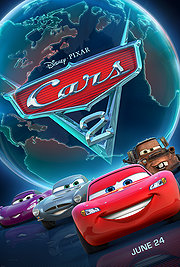 Pixar has long been touted as being one of the best champions of story in movies. Many times they’re tooting their own horns. With their past success and near perfect track record of reviews it’s hard to argue with them. But what do you get when you make a sequel to your worst reviewed film? You get an even worse reviewed film.

The original Cars stands at 74% on the tomato meter at Rotten Tomatoes. At the time of writing this article Cars 2 is at 38% and dropping. Granted not all the reviews are in, this number represents 47 out of what will wind up being around 200. To put this in perspective, Cars aside, the lowest tomato meter number for a Pixar film is A Bug’s Life at 91%. If these were school projects Pixar was turning in they would have gotten 10 A’s, 1 C, and what could well turn out to be a D or possibly even an F.

When you get to the top, the only way is down, so it was inevitable that this would happen at some point. Pixar has been playing it smart and avoiding this for awhile, but let’s face it, one of the big reason’s Disney bought them was to create sequels. Sequels cement the characters in people’s minds and allow Disney to fully push ancillary dollars through the roof. This is also a big reason Pixar went with Disney, to regain control of its properties and stop Disney from created sub-par sequels. If Disney had made Cars 2 sans Pixar it probably would have been a direct-to-DVD movie.

Even Cars 2 weekend competitor at the box office Bad Teacher is scoring a current 51%. Of course Bad Teacher is playing counter-programming to Cars 2 and shouldn’t syphon any tickets away. Will this hurt Cars 2 box office? Probably not. It certainly won’t hurt Pixar in the long run either, as Monster’s Inc. sequel Monster’s University (release date: June 21, 2013) will put them back on top of their ‘story’ preaching pedestal soon enough.

What do you think? Will this hurt their box office returns? Will you be seeing Cars 2 in theaters?

Here’s the list of Pixar movies and their Tomato Meter scores: