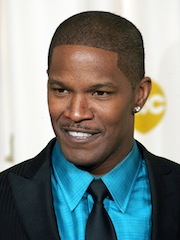 Deadline is reporting that after much speculation from Will Smith to Idris Elba that Jamie Foxx has been cast as the lead character in Quentin Tarantino’s latest opus Django Unchained. Foxx’s character is a freed American slave who teams up with a German bounty-hunter played by Inglorious Basterds Oscar winner Christoph Waltz. Together they set out to save Django’s wife from an evil plantation owner portrayed by Leonardo DiCaprio.

This is the perfect role for Foxx, who’s mainly been starring in cameo’s and bit parts lately, to get back in the game with. Foxx has come a long way from his days on In Living Color, moving to more dramatic roles and finally winning an Oscar for Ray in 2004. Could this be another Oscar winning role? I’d much prefer him over Smith or Elba, their images just don’t seem to fit this role. What do you think about the cast? Anyone you’d want to swap out for someone else? Let us know in the comments!