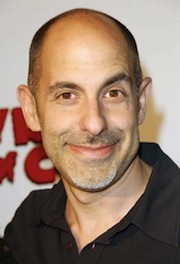 This is excellent news for me. I am a long-time fan of Goyer, the Blade series, Christopher Nolan’s Batman series, Dark City and Kickboxer 2: The Road Back (wait what?). Plus he brought Superman back from the dead after writing Man of Steel. His style of writing is something that Hollywood needs more of – less dialogue.

Regardless no one can make this worse than Roland Emmerich did in 1998’s Godzilla (well except for his less liked and less paid doppleganger Uwe Boll). This is after all a Legendary Pictures deal, which has made some very high grossing films for Warner Bros – Hangover 1 & 2, Nolan’s Batman and Inception flicks, 300 – (oh ya, and Jonah Hex).

Currently they are also working on Guillermo del Toro’s similarly themed giant monster movie Pacific Rim. I wonder if there’s any sort of competitive feelings between del Toro and Goyer. The two are responsible for Blade II, easily the best in the series. The differences and similarities between the two films will be interesting to see. At least I’m now a little hyped over this new Godzilla installment.

What do you think? Do we really need a Godzilla and a Pacific Rim?