The internet has been buzzing the past few weeks over the new Robin concept art that was released for Batman: Arkham City. First there was the shaved head image of Robin that resembled a cross between Chris O’Donnell and Cole from inFAMOUS. Later it was revealed that The Caped Crusader’s sidekick would sport a hood to hide the very same shaved head that caused an uproar. That, however, also prompted cries of unoriginality. Without a doubt the hooded character concept has been overused recently in games such as the Assassin’s Creed and Prototype. Still, Robin was in desperate need of an overhaul and personally I believe the addition of the hood fits nicely with the darker theme of the Arkham games. I mean lets face it, The Boy Wonder has lost some appeal over the past few decades. It’s to be expected though that any changes/updates made to Robin are going to be met with some type of fanboy backlash. 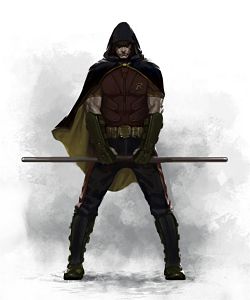 Joseph Gordon-Levitt Not The Riddler or Deadshot, Role Revealed by Variety – UPDATE: EW Says Not True!