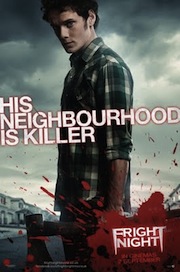 There’s generally not a ton of overlap in subject material between Hollywood and the fashion world (definitely a good thing – otherwise, all clothing would’ve become digital in the early 2000s), but in recent times the two industries have shared a similar passion: revisiting the 1980s.

Chances are good you noticed the 80’s coming back last year, with remakes of A Nighmare on Elm Street and The Karate Kid – not to mention, an A-Team movie and the MacGyver-inspired parody, MacGruber – hitting theaters left and right. There are more 80s movie remakes on the way as well, including this week’s Fright Night. 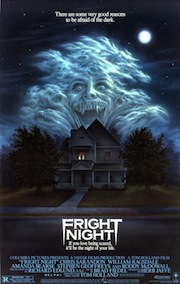 Tom Holland (The Langoliers TV mini-series) wrote and directed the original 1985 version of Fright Night, a horror-comedy about a teenager who discovers that his new next-door neighbor is an evil vampire. It was a moderate hit back in the day and has attained semi-cult status since.

So why remake it, exactly? The answer is simple: Twilight.

Fright Night is essentially the antithesis of Stephenie Meyer’s ultra-popular young adult supernatural romance series (there’s a mouthful) in just about every way conceivable. What better way to profit from the collective bitterness of Bella, Edward, and Jacob haters than to remodel and update such a movie for 2011?
Fright Night is to Twilight as Kick-Ass is to Spider-Man, in terms of content and tone. The former vampire movie has lots of blasphemous cursing, gory killings, and teenage hormones run amok. Think what Joss Whedon’s Buffy the Vampire Slayer TV series might’ve been like, had it aired on Showtime, and you’ll get the gist. 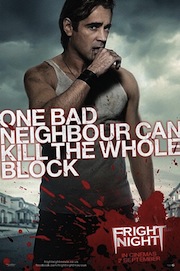 Colin Farrell is playing the handsome bloodsucker Jerry Dandrige in the Fright Night remake, taking over the role previously played by Chris Sarandon (a.k.a. Prince Humperdinck in The Princess Bride). It’s no accident that Farrell has adapted a slick-haired emo manboy look, similar to Robert Pattinson’s as Edward Cullen, for the part.

The new Fright Night boasts a cast full of what you could call “fan-favorite” actors like Anton Yelchin (Chekov in the new Star Trek) and Christopher “McLovin” Mintz-Plasse. It also features former Doctor Who star David Tennant as an illusionist/vampire hunter—who spends a good chunk of the film lounging about shirtless, while wearing tight leather pants—and Imogen Poots as Yelchin’s too-hot-to-believe girlfriend.
Back to Basics 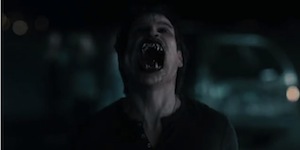 It’s the promise of traditional (ie. not-Twilight style) vampire horror that is the big selling point for Fright Night. Farrell doesn’t pine for his soul mate or glitter in the sun; he gleefully ignores the pleas of his victims as he drains their blood and in full vamp mode resembles a cross between a human and a Great White Shark.
Fright Night Predictions

The Fright Night remake was scripted by Marti Noxon (a longtime staff writer on Buffy) and directed by Craig Gillespie, who helmed several episodes of Showtime’s United States of Tara. Sounds like the perfect marriage of talents, right?

Sadly, not everything the pair has touched in the past turned to gold. Gillespie was previously responsible for one good warped comedy (Lars and the Real Girl), and one not-so-good (Mr. Woodcock). Likewise, Noxon was previously responsible for scripting I Am Number Four, a.k.a. Twilight with aliens. So quality is not guaranteed when they’re involved.

But hey, if nothing else, there will be no emo-hipster vampires in Fright Night. That alone is progress… or a recovery, depending on how you look at it.

James Ged is an enthusiastic horror/ sci-fi geek, and social media marketer. He blogs about TV, movies, and just about anything else you can find on Comcast cable. Follow him on Tumblr at TV Buzzer.