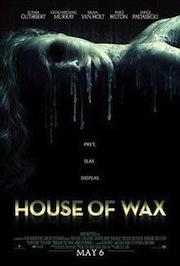 This is the remake, not nearly as acclaimed or well received, but I find it necessary to include this on the list for the innovative and unnatural creativity of the bloodshed. I give props to the director and the special effects people for their desire to turn a pretentious waste of time into an almost orgasmic gorefest. Whether it was watching a kids face peeled off through a layer of wax or the molten wax shower, I wasn’t totally bored. 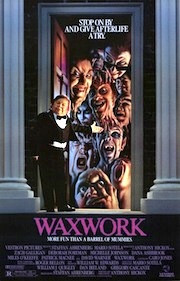 This is one of those hidden horror films from the late eighties. One of those gems that when I see the cover, I’m instantly drawn and curious. And then I turn the cover over and read the back and can’t help but get a little fanatical when the synopsis tells me that eighteen of the greatest horror villains of all time have been compiled into one film (Dracula, Marquis de Sade, the Werewolf, zombies, etc.). I know it’s going to be horrible. This isn’t something that won any awards. And I don’t care. I go in expecting a bad time and am overjoyed to discover I am right, and that makes me love the film. And finally, one of those scenes I’ve always wanted: a man dies in a pot of boiling hot wax. How can it go wrong? 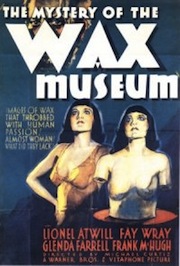 This was the first film to do it, the first to use wax as an implement of horror and convince an audience to be terrified of it. That’s why this is on the list. It is not a campy horror film like its Vincent Price remake. This film was a mystery; the audience had no idea what to expect or who their real villain was. And it was probably one of the first cinematic reels to showcase the image of melting faces that could almost pass for human. 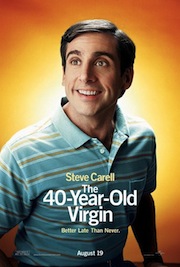 You know exactly where I am going here. Even if you have not seen the movie in its entirety, you know this scene from either the movie trailers or from your friends who can’t stop laughing about the absurdity of it. The chest waxing scene. “Kelly Clarkson!” 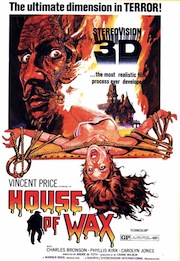 Regardless of the campy nature of the film, regardless of Vincent Price’s stereotypical over-dramatic performance, the title moment of melting wax absolutely belongs to this film. It is over the top, and probably not even scary to a modern audience, but it remains unforgettable, mostly for its climax, where our heroine, Phyllis Kirk, breaks open the wax mask of Vincent Price’s character to reveal the deformed figure beneath. The initial ten minutes of the film opens with an epic melting moment. Price’s character is a famous wax sculptor and through an accident, his entire studio and every piece he has ever made dissolve away in the great flames. The camera closes in on the face of his Marie Antoinette, his prized masterpiece, as her immaculate face and dress burn away in the accident. The film also debuted in 3-D, which may have added an extra dimension to the experience.

Janice Oliver is a home decor consultant and content contributor for candleluxury.com, a shopping destination for Votivo Candles Discount exclusives, and hundreds of other scented accessories in the Luxury Candle line.

One thought on “Top 5 Best Melted Wax Moments in Movies”