Comic Book heroes are defined by their competition. Luckily (or should I say unluckily), throughout the years hundreds of super villains have emerged. Many have come and gone, while other villains have stood the test of time. Some survived to become even more iconic than the heroes that faced them. Whatever the case may be, super villains make the comic book world go round. Below are the Movie Mavericks’ top 5 favorite comic book super villains of all time. 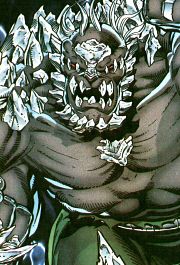 Doomsday killed Superman. That’s right this monster managed to take down possibly the most powerful superhero of all time without the help of any kryptonite. No top five list can be complete without the villain who killed The Man of Steel. Doomsday is a product of extreme evolution. He has survived since prehistoric times on Krypton by simply killing or destroying everything in his path, including a fleet of Green Lanterns. Responsible for the destruction of entire planets, Doomsday’s wrecking ball style of villainy is more potent than it initially seems. Although the character seemed to peak early in his comic book career, Doomsday is responsible for the biggest comic book event of modern times, the death of Superman. 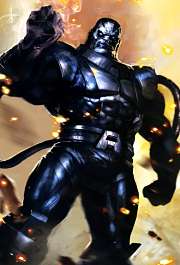 The first mutant to ever walk the earth, Apocalypse has been around since the dawn of ancient Egypt. Immune to death, Apocalypse’s mutant power enabled him to revive once dead. Powered by ancient Egyptian technology Apocalypse has regenerated himself countless times, each time awakening even more powerful than the last. Because of this En Sabah Nur (the First One)’s powers are practically limitless and exceptionally hard to define. Nonetheless this villain has proven to be one of the most powerful mutants of all time. Having battled with the X-Men, The Avengers and countless other heroes, Apocalypse only grows stronger after each encounter. 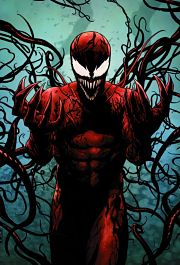 A stronger version of the more well-known villain Venom. Carnage is what happens when a convicted psychopath’s blood is infused with a powerful alien symbiote, essentially turning the ruthless killer into the ultimate killing machine. The red and black maniac has the ability to morph his web-like material into many shapes, including deadly sharp blades. You could call him the T2 of the comic book world. Carnage can climb walls like Spider-Man and pretty much trumps both Spider-Man and Venom in every physical aspect. Combine that with a few mind control abilities and it is easy to see why it took both Spider-Man and Venom to finally bring this super villain down. Carnage’s looks and intentions just radiate evil. As a super villain he deserves more attention from the non-fanboy world. Unfortunately, Carnage was rumored to make an appearance in the now scraped Spider-Man 4 film. Hopefully, Marvel Studios can work him into the current reboot at some point in the future. 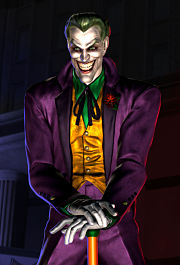 Possibly the most mentally unstable super villain of all time, Joker is defined by the madness inside his mind. Known to the world as Batman’s arch nemesis, the psychotic clown-faced criminal has reached ‘uber’ status in recent years. Armed with little more than chemical weapons knowledge and a relentless urge to challenge The Caped Crusader, the Joker has managed to give one of the greatest super heroes of all time trouble time and time again. From pure comedy to ruthless murder, Joker’s appeal lies in his ability to switch personalities at and instant. Even though he is technically the least powerful villain on the list, what Joker lacks in power he makes up for in pure insanity. 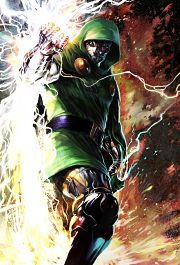 A legend in comic books, Victor Von Doom has a face that you won’t forget (or mask that is). Quite possibility the coolest looking villain on the list, Dr. Doom is a classic figure who has managed to grow with the ages. His full suit of armor covered with a green tunic, hood and cape looks as awesome today as it did in 1962. Known for his long standing rival with the Fantastic Four, Doom’s intelligence and nerves of steel make him a formidable foe for any super hero or super villain. Over the years Dr. Doom has defeated countless enemies, both good and evil. He even managed to take the powers of Silver Surfer. But that is not why Doom is number one on the list. Doom is number one on the list because he is a perfectionist. Dr. Doom will not rest until the universe is perfect in the eyes, no matter who or what stands in his way.