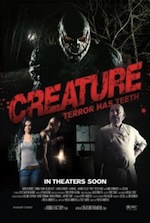 A little indie horror flick recently made waves by coming out in 1,507 theaters. The Bubble Factory released Creature wide with no studio support. An impressive feat no doubt, but overshadowed by meager earnings of only $327,000 for its opening weekend. That gives Creature the worst per screen average of any film released into 1,000 theaters or more and a second place holding for worst opening in 1,000 plus theaters as well. Granted Creature was in good company of other under-performers for the worst weekend of the year by $10 million. Hopefully The Bubble Factory will inspire others with this possibility and we will see more indie films going wide in the future. Jon Sheinberg, one of the producers on the film, filled us in on some of the things they were able to accomplish and learn with this release:

The entire project was innovative and in many ways a first for many aspects of what we did to not only make the film, but also to market and distribute the film. We did not rent any theaters at all. Every theater was booked just like any major theatrical film. Primarily we had tremendous support from exhibitors like AMC, Regal, Cinemark, Carmike and Malco. If the presidents of their entertainment divisions didn’t encourage us as well as agree, and even suggest our release date, we not only wouldn’t have done this, but we couldn’t have done this. The way we utilized both digital in-theater advertising, online marketing and advertising and in as many cases as possible digital cinema prints vs 35mm we did. There are many other details that relate to our innovative website, which by the way had over 1.5 million visits as of two weeks ago, to late night tv programming, where a special tv show I produced to complement as well as tell the “back story” of LockJaw or how our creature was made and aired over 150 times.

Unfortunately we had a tough weekend. Much of this was experimental. We learned that although there’s tremendous empirical data that shows how effective online and mobile are there’s still most likely a need for expensive tv commercials to get the unaided awareness needed to even break through. Now that were opened we’ve noticed that we’re trending very high online etc because of all we did as well as the controversy of why we opened so wide etc..

Remember Warrior spent at least $25 million on marketing and was lucky to get $5.6 million and Bucky Larson also spent at least $15 million to market and barely did better than us. Sadly they will get to stay out there and our film will get pulled by almost all the exhibitors. Even Huffington Post today called us to say they noticed how much chatter is out there on our film. They wanted to be defenders of our release. There’s much more to say and many areas that are either unfair as it relates to the independent distributor, or simply said, things like getting trailer play and one sheets up in theaters today are bought and sold. I was able to overcome all of that and we did this for a fraction of any film ever released in 1500 theaters. That also includes Canada which was opened wide as well.

DIY Film Distribution: How Albert Pyun Is Ditching The Studios