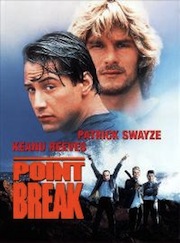 With the successful reemergence of the Fast and Furious franchise what could be a better time for Alcon Entertainment to reboot Point Break? Not a lot is known about the film at the moment, the press release for the announcement below simply states that the plot will be similar to the original. No doubt we’re about to hear a lot of speculation on who should star. A Keanu Reeves appearance might not be a bad thing, too bad Patrick Swayze passed on before this and the Dirty Dancing reboots.

LOS ANGELES, CA., SEPTEMBER 12, 2011 – Financing and production company Alcon Entertainment is set to remake the classic 1991 action-thriller POINT BREAK as a feature film for release by Warner Bros, its home studio, it was announced by Alcon co-founders and co-CEO’s Broderick Johnson and Andrew Kosove.

The film is being fast tracked, with the filmmakers set to take the project out to directors soon.

The new version is set in the world of international extreme sports, and like the original involves an undercover FBI agent infiltrating a criminal ring, but plot points beyond that have not been revealed by the filmmakers.

State Johnson and Kosove: “Who doesn’t love the Kathryn Bigelow original and its pure heart-pounding action and thrills? Kurt’s take infuses the story and characters with new twists and settings. We’re very excited to be in business with Kurt, and Michael DeLuca, Chris Taylor, and John Baldecchi.”

Adds DeLuca “’Point Break’ wasn’t just a film, it was a Zen meditation on testosterone fueled action and manhood in the late 20th century and we hope to create the same for the young 21st!”

In addition to the feature rights, Alcon has also secured television and gaming rights to POINT BREAK.

The Bigelow original, starring Keanu Reeves, Patrick Swayze and Gary Busey, was produced by Largo Entertainment and released by Fox. The film went on to become an instant classic and remains beloved by the youth culture around the world.