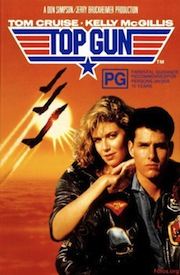 After releasing the anniversary edition of Top Gun into theaters and then of course yet another disc version on Blu-Ray and DVD, Paramount has decided that to further squeeze money out of the film they’ll release it in 3D next year. Legend3D, the company doing the conversion, played four minutes of the conversion consisting mostly of one of the movie’s big aerial combats at the International Broadcasting Convention in Amsterdam.

Legend3D CEO Rob Hummel made a statement saying Paramount was looking to release this next year (2012) and that they will seek Tony Scott’s approval before going forward. Paramount is still warm on the idea of a Top Gun 2 with Tony Scott directing. If not for that they wouldn’t (and probably still don’t) care at all about his involvement or ok’ing what they’re up to. Personally I don’t think Top Gun lends itself to 3D, this movie is pretty much a drama about a top notch Navy flight school with some great Tony Scott visuals scattered throughout.

Titanic, The Lion King, Top Gun, what older movie is next for 3D conversion? Are there any movies you’d like to see converted to the 3D illusion?