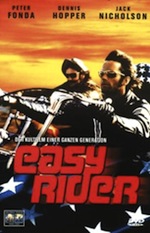 5. Easy Rider
Last but not least, this is one of the most defining American road movies in cinema history, and it all starts in Vegas. Filmed in 1969, this is an authentic insight into the hippie movement, with Peter Fonda and Dennis Hopper roaring through the Nevada desert, picking up unlikely hitchhikers, and taking you with them on the definitive counterculture journey. 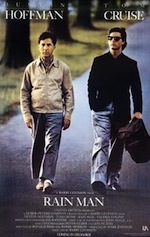 4. Rain Man
Though not set entirely in Las Vegas, Tom Cruise playing a money-driven exploitative older brother and Dustin Hoffman giving his spectacular performance of the autistic savant, pass through the city on their classic road-trip. In what is perhaps the most iconic scene of the film, Hoffman wins vast sums at the poker table by memorising cards, and causes a run in with some stereotypical Vegas proprietors. 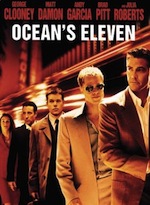 3. Ocean’s Eleven
Whether the 1960 original, or the 2001 all-star remake with George Clooney, Brad Pitt and Julia Roberts, this casino robbery classic takes you on a sleek and well scripted tour of Vegas in all its wealth and glamour. With a robbers-eye-view of the casino, you see the heist unfold with a brilliantly evoked tension that will have you at the edge of your seat. 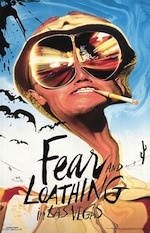 2. Fear and Loathing in Las Vegas
Based upon the infamous accounts of Hunter S. Thompson, who is masterfully portrayed by a young Johnny Depp, this is a surreal, hilarious, and unsettling tirade through the city. Thompson and his sleazy compadre roll into town in a red convertible Chevy, check in to a swish hotel complete with animal print wallpaper, and proceed with a drug-fuelled rampage through bars and casinos narrated with Thomson?s elaborate flair. 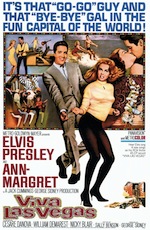 1. Viva Las Vegas
The ultimate Vegas classic, starring Elvis Presley and Ann-Margaret, full of good old American flavour. See the city in its hay day, full of the spirit of luck and love, and above all shimmering star-struck glamour. Watch the King perform to the backdrop of this lavish city, and you will finally understand the flocks of Elvis impersonators that populate it today.
If watching all of these cinematic masterpieces doesn’t make you itch to book flights to Vegas and see it for yourself, then nothing will. This city symbolises not only excess, wealth, and outrageousness, but Las Vegas has featured on the silver screen with glamour, drama, and flower power. It just remains to see for yourself whether or not the camera can lie.

Get these Best of Las Vegas Movies from Amazon.com