Put the boot to fruit. 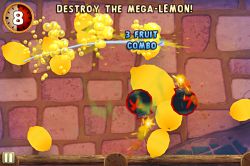 Fruit Ninja by Halfbrick Studios is one of the most popular App games of all time, with over 10 Million copies sold worldwide. Although, I enjoyed the original Fruit Ninja the first time I picked it up, the game quickly became just another application on my phone that I never revisited. Don’t get me wrong it was a fun game but it had just a little too much repetition for my taste.

After purchasing Fruit Ninja: Puss in Boots I was expecting more of the same old thing hidden beneath new packaging. Dreamworks’ Puss in Boots (2011) film is obviously the inspiration behind the title, and I suspected Halfbrick Studios was hoping to make a pretty penny based on the tie-in alone. Surprisingly, Puss in Boots is more than just a cheap remake of the original with a new title.

The game features two different modes: ‘Desperado’ and ‘Bandito’. ‘Desperado’ is your standard Fruit Ninja formula with a few new additions, like special magic beans from the film. ‘Bandito’ the new minigame mode, is a breath of fresh air that brings both new challenges and varied gameplay to the tired formula.

“Bandito” mode is broken down into four acts, with each act having four different challenges. The challenges are randomly selected each time you play, and each act has a random challenge marked by a “!”. Some challenges require aggressive slashing, while others require more finesse. Both types provide entertainment and the constant variety is enough to keep you wanting more. This is something the original Fruit Ninja sorely lacks. Plus, hearing Puss in Boots comment during key moments in the game adds some flavor to the experience.

Bottom Line: Fruit Ninja: Puss in Boots is a fun, time-wasting iOS game with more to offer than the original. With a price tag of only $0.99 for the iPhone and $1.99 for the HD iPad version, both new and old fans of the series should give this game a try.