Not Another Not Another Movie is not a straightforward spoof of spoof movies, instead the filmmakers have decided on a mockumentary approach. This fake documentary covers the rise and fall of a simple production assistant at a failing low budget studio as he makes his way to the director’s chair. Randy loves his job as a PA and his next door neighbor Wendy, but spoof movies are in his nightmares, literally. Randy mans up though, when he’s given the chance to direct his own movie, a spoof idea that he himself accidentally put forward. Sprinkle in some cameos from big name actors such as Burt Reynolds, Chevy Chase, Michael Madsen, Vinnie Jones, Richard Tyson and Wolfgang Bodison, some of which play themselves and others take joking stabs at the real person behind the character (Michael Madsen as Lester Storm replies “Kill Bill” when asked what’s the greatest martial arts movie). Will Randy get his movie made and save the studio? Can he get Wendy’s hand in marriage?

David Schultz co-writes and stars as Randy. He’s the kind of guy you want to root for, a great underdog. Not to mention the fact that he’s just funny. His line deliveries make run of the mill dialogue hysterical. The cast is superb and packing these zany personalities together results in some explosive and fun moments. The confessional style lends itself well to this content, and keeps pace with other shows using the same style, namely The Office. The cameos are well worked in and spread throughout for maximum comedic effect, unlike many other lower budget films that get big names and then barely use them. My only complaint is the under use of Ellie Gerber who played Wendy. She seemed to be channelling the queen of spoofs, Anna Faris, which was a delight to see.

David Schultz does a good job with impressions during some of the real spoofing, Bruce Willis from Armageddon and Mel Gibson from Braveheart. The majority of the spoofs aren’t necessarily movie scenes themselves and more just situations based around Randy’s past or whoever is currently doing a cameo. The problem with spoof movies is they tend to be more clever than laugh out loud funny.

We can’t end this review without mentioning the similarities here to the low budget mockbuster studio The Asylum. The movie that almost sinks the studio in the opening of the film is Titanic II. The Asylum actually made a Titanic II (yes, it exists and no, it’s not a sequel, just a clever title).

If you like mockumentaries or movies about movies then check out Not Another Not Another Movie, it’s a solid flick with a few good laughs. 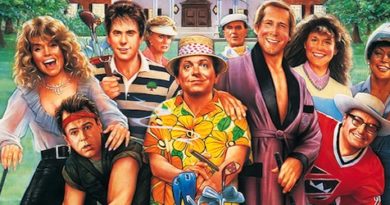