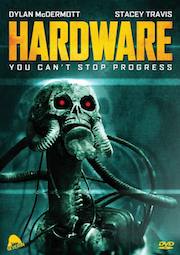 In the future, a nuclear war has transformed the Earth into a radioactive wasteland where the sea has dried up leaving it as a post-apocalyptic desert. In the desert, a scavenger named Nomad discovers a robotic head. A space marine named Moses Baxter buys the robotic head from Nomad as a Christmas present for his girlfriend Jill Grakowski, who decides to use it for one of her sculptures. But all hell starts breaking loose, when the robotic head is activated and begins to rebuilt itself. When Alvy, a junkyard dealer, discovers the robotic head is a Mark 13, a military cyborg of a project that was abandoned, Moses learns Jill’s life is in danger. The Mark 13 cyborg goes on a violent rampage in Jill’s apartment as she has become the the prime target for extermination. 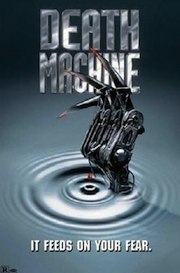 Chaank Armaments is experimenting with the ultimate fighting machine which is part human – part machine. So far, the Hardman project has been unreliable and has killed a number of innocent people. The genius behind this project is Jack who lives in a world of models, toys and magazines. When he is fired by Cale for killing a few corporate officers, he unleashes the ultimate killing machine called the ‘Warbeast’ against Cale and those who would help her. Stephen Norrington’s directorial debut. 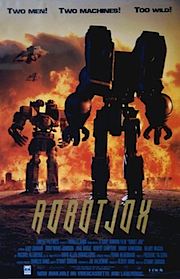 50 years after a nuclear war, the two superpowers handle territorial disputes in a different way. Each fields a giant robot to fight one-on-one battles in official matches, each piloted by a man inside, known as robot jockeys or jox. The contest for possession of Alaska will be fought by two of the best. The conscientious Achilles fights for the Americans. Opposing him is a Russian, Alexander, a ruthless and bloodthirsty adversary who has killed his previous nine American opponents. With a traitor feeding the Russians secret weapons information and new, genetically-engineered jox looking to take his place, Achilles faces obstacles at every turn in the hardest battle of his life. 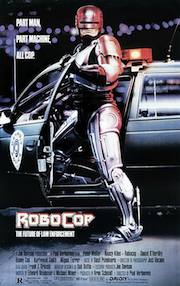 When a good cop (Peter Weller) gets blown away by some ruthless criminals, innovative scientists and doctors are able to piece him back together as an unstoppable crime-fighting cyborg called “Robocop.” Impervious to bullets and bombs, and equipped with high-tech weaponry, Robocop quickly makes a name for himself by cleaning up the crime-ridden streets of violence-ravaged Detroit. But despite his new, hardened exterior, Robocop is tormented by scraps of memory of his former life, and relives vivid nightmares of his own death at the hands of the vicious killers. Now he is out to seek more than justice… he wants revenge! The giant killer robot here is the ED-209, a monster with two large machine guns as arms. 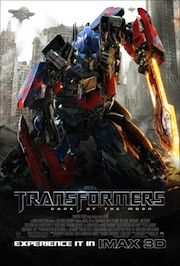 The interstellar war between the Autobots and Decepticons shifts into overdrive following the discovery of Sentinel Prime (voice of Leonard Nimoy) in this sequel from director Michael Bay. Only a precious handful of officials in the government and military realize that the 1969 moon mission was the result of an event that threatened profound repercussions for the entire human race. When the Apollo 11 astronauts discover the wrecked remains of Sentinel Prime on the surface of our natural satellite, they bring him back to planet Earth. But Sentinel Prime wasn’t the only alien object on the moon, and when a malevolent new enemy makes its presence known, only the Autobots can save humankind from certain destruction.

Get these Best of Fighting / Killer Robot Movies from Amazon.com