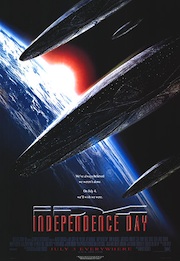 Looking back on the mid-1990s its easy to forget how much a phenomenon ID4 (as it was dubbed in press materials) turned out to be. It spawned a wave of Roland Emmerich directed blockbusters like Godzilla, The Day After Tomorrow and 2012. It also confirmed the undeniably charismatic Smith was a big screen star and not just a Television actor. Durning the summer of 1996 this was he movie to see, it outgrossed heavy-hitters with established star in Mission Impossible, Eraser, and Twister. Time and the home video format haven’t been kind to this one. The Special effects hold up reasonably well but the cardboard characters and rudimentary storyline are huge detriments. Undoubtedly this film played much better in the theatrical experience. I saw it four times during that summer 16 years ago and I remember thinking ,”ID4 is so good the next Star Wars movies are going to be awesome!”. If only I knew what horrors and disappointment awaited me. 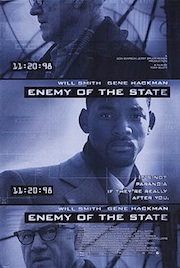 This was the first time I realized that Will Smith could act. Not that an action thriller directed by maestro Tony Scott is any place for nuanced performances or pathos. Here Smith plays a Washington based lawyer mistaken for a man possessing information on the assassination of a US senator. A shadow government agency begins to track Smith’s life and erase his existence from any database. The scary concept here was the suggestion that our big brother fears are valid. When this movie premiered it sparked a wave of controversy in the way government eavesdropping was portrayed. After 9/11 many aspects that were once scoffed at became frighteningly real, for better or worse. 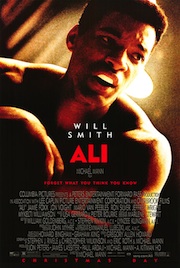 For all the roles Smith has portrayed Muhammad Ali is perhaps the most fitting. Is there any other actor for any other generation that could have embodied this almost inimitable sports figure? This portrayal garnered Smith his first Oscar nomination for Best Actor and deservedly so. It’s a shame the film itself isn’t on par with the magnificent central performance. Michael Mann’s biopic is still a rambling epic with flashes of brilliance and a lead willing to got to great lengths in getting the subtleties just right. Some may prefer the more heartfelt The Pursuit of Happyness over this cold, unflinching look at one of the most controversial athletes of the last 100 years. 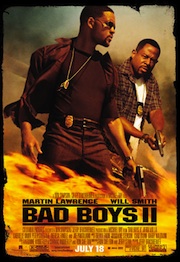 In essence the longest episode of Miami Vice ever, and an action epic that just won’t quit. Michael Bay tops everything about the first film. The sequel is funnier, better looking, longer at 2 ½ hrs, with possibly the greatest single action sequence of the decade. It begins with a freeway chase / shoot-out, like 100s of films previously. Then it begins to raise the stakes, the villain starts unleashing cars from a cargo hitch. The cops in pursuit have to dodge traffic and automobiles being launched at them. When one car gets caught on a loose chain, the fleeing villains use the vehicle as a whip to side swipe pursuing police cars. Most films would stop their, but not Bay’s movie. Next the car bursts into flames and becomes a burning mace. Yes, it’s ridiculous, but it also has to be seen (top notch CGI effects from Brooks Institute alumni Robert Legato) to be believed, while this is happening the interplay between Smith and Lawrence is hysterical. They inhabit these characters with swagger and charm, both seeming to be totally at ease, and in return creating great chemistry. Lawrence is allowed an extended comedic sequence in which the character accidentally ingests ecstasy. Those ten minutes are funnier than anything in so called ‘comedies’ of 2003. Audiences eat it up as well with a gross north of $130 million, significantly improving on its predecessor’s $65 million back in 1995. As recently as Nov. 2009 rumors have swirled that Bay, Smith, and Lawrence would return to a 3rd film. As much as I welcome the reunion of the team, it will be a challenge to top this outing for thrills and laughs. 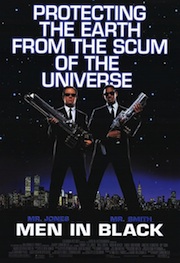 MIB is the quintessential Will Smith movie. A great summertime blockbuster with loads of action, humor and special effects. This movie was Smith’s bold deceleration to Hollywood haters that claimed ID4 was a fluke, MIB would place behind only Titanic as the second highest grossing film of 1997. It also spawned a ridiculously successful radio hit, a cartoon series and two sequels. Luckily the film is not just a ‘product’ it’s an original, amusing comedy with witty dialogue and offbeat characters. Director Barry Sonnenfeld and Smith would try their luck again with disastrous results on Wild Wild West.

Get these Best Will Smith Movies from Amazon.com

Independence Day 2…on the way?