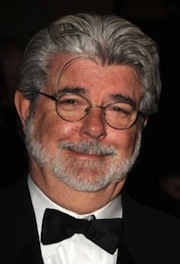 In a recent interview with The Hollywood Reporter George Lucas stated that Han Solo never shot first. It was simple confusion with the way that scene was edited – all in close ups – when they pull their triggers. In the newer versions of Episode IV he claims all he did was move out to a wide shot. You’ll have to ultimately judge for yourself, but after reviewing both the old version and new version of the scene, I’m kind of inclined to believe ol’ George, although the dialogue kind of pushes it the other way. These so called happy accidents happen in movies all the time. With so much going on something meant to be one way may turn out to be another, or easily perceived to be different than what the filmmaker had originally intended, as was the case here.
“
Well, it’s not a religious event. I hate to tell people that. It’s a movie, just a movie. The controversy over who shot first, Greedo or Han Solo, in Episode IV, what I did was try to clean up the confusion, but obviously it upset people because they wanted Solo [who seemed to be the one who shot first in the original] to be a cold-blooded killer, but he actually isn’t. It had been done in all close-ups and it was confusing about who did what to whom. I put a little wider shot in there that made it clear that Greedo is the one who shot first, but everyone wanted to think that Han shot first, because they wanted to think that he actually just gunned him down.

It’s the same thing with Yoda. We tried to do Yoda in CGI in Episode I, but we just couldn’t get it done in time. We couldn’t get the technology to work, so we had to use the puppet, but the puppet really wasn’t as good as the CGI. So when we did the reissue, we had to put the CGI back in, which was what it was meant to be.

If you look at Blade Runner, it’s been cut sixteen ways from Sunday and there are all kinds of different versions of it. Star Wars, there’s basically one version — it just keeps getting improved a little bit as we move forward. … All art is technology and it improves every year. Whether it’s on the stage or in music or in painting, there are technological answers that happen, and because movies are so technological, the advances become more obvious.

Now the Blade Runner bit does little to support his side of this. Those Blade Runner cuts are all different, and some change the film in dramatic ways – this is true even with the smallest of changes to a film. The real question here is who is in charge of the meaning of a film? Is it the filmmaker or is there a general consensus of audience members that define what something means? If a filmmaker is trying to say something, but the audience hears something else (and likes what they hear, a lot), does said filmmaker have the right to go back and clarify his voice in an unmistakable way? Is it even a good idea to touch something people already love? This could be argued about until we’re all dead. My point in all this is, all those versions of Blade Runner are available for my viewing in a nice neat box set. If I go down to the store and buy Star Wars, which versions will I come home with?

Here’s a fan cut with Han clearly shooting first (I actually like this cut the best):