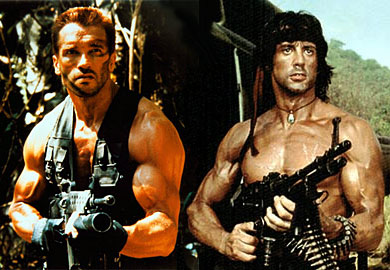 We all know that Sylvester Stallone and Arnold Schwarzenegger were incredibly competitive in the past. But did you know that Stallone once punched Richard Gere off a movie? Check out these snippets from a recent interview Stallone did with Macleans.ca and check out the full interview plus video for more.
“
I’m dying to do another Rambo. He’s in Arizona on the border. It will involve him going into Mexico. I don’t think Rambo likes Mexicans.

Q: So how do you relate to Rocky and Rambo? Are they twin sides of your psyche?

A: Rambo is me before coffee in the morning. Rocky is me after coffee. Rambo has reverted into kind of like an id: primitive, reactive and instinctual, almost like an animal. I love this character because he hasn’t quite been fleshed out. He’s like an errant knight, looking to die in a glorious fashion. He has no desire to go into old age or have a family. Rocky is the antithesis: he cannot live without family. So you’ve got the American Frankenstein monster, then you have the American Dream. In the book, Rambo gets killed. I thought it was not the proper message. There had been close to 200,000 suicides by returning Vietnam vets. I said, “Why don’t we take him right to the edge without annihilating him?” Quentin Tarantino said, “You’re a coward, you should have killed him!” I said, “Quentin, you’re a lunatic. I want to do some sequels, brother.”

Q: You haven’t played a lot of villains.

A: No. I’m getting there, though. I have one coming up based on a wonderful film that was done in Spain, No Rest for the Wicked. It’s hard-core, in the Bad Lieutenant mode. Badder Lieutenant, we’re calling it.

Q: You and Arnie used to be enemies.

A: That went on for a long time. We couldn’t stand to be in the same room. But I like a good adversary. It makes you lose sleep and want to get up in the morning and go to the gym. We started in the business almost the same day. We were at the Golden Globes and he had won for best newcomer; I lost for best actor but we had won best picture, and I took this bouquet of flowers and threw it on him like, “It’s on, pal!” From that day on it was a very competitive thing. Then you move on, have families, and you realize that this fellow’s very similar to you. Now we get along great.

Q: When did it change?

A: When he started to run for governor. He started inviting me to events. I said no, then my wife says, “Come on, he’s extending the olive branch,” and next thing I know is I’m on the campaign trail, then we just hit it off. He did some great things, like, to be in Expendables when he was governor, for free.

Q: You and Gere had a tiff.

A: All the time. He was supposed to be in Lords of Flatbush. We were auditioning and would do improvs. He was always grabbing me and twisting my skin. I’d say, “Hey, stop! Seriously.” He keeps going on, then we’re sitting in the back of a car and he’s eating chicken covered in mustard. I said, “Richard, the mustard’s going to drip off and go on my leg and I’m going to belt you. I’m warning you right now.” He went, “Oh, yeah?” Sure enough he bites it, it goes on my leg. Boom! He goes, “Let me out of this car.” It’s like, “Either him or me.” I stayed and he went.

Arnold Schwarzenegger also gave some insight into The Tomb, the new film starring himself and Stallone, while speaking with The Arnold Fans. This one keeps sounding better and better, can’t wait for this true Stallone and Schwarzenegger team up.

“
The next movie I’m working on again with Sly is The Tomb which will be a prison movie. We are both caught in the most difficult prison to break out of, which is a huge ship out in the ocean, so you can’t escape. But of course, we figure it out!

Then we’re going to do The Unknown Soldier which is going to be with the Bandito Brothers that did Act of Valor, the number one movie right now and is getting such notoriety because they shot if for 4 million dollars and it looks like 100 million dollar movie because they got military and shot real action stuff which makes the movie so big and very successful, great story and everything. Those directors are doing Unknown Soldier, we start shooting sometime in June. Hopefully by that time my shoulder will be OK so I can do the stunts, but I’m looking forward to all that.