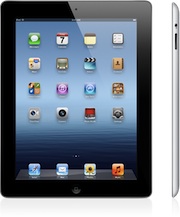 Let’s start with the iPad 3. Yes it isn’t much of a change from the iPad 2, but the difference between the old screen and new Retina display make it worth the cost in my opinion. After having seen the difference between an iPod without and an iPhone with a Retina display in person this is guaranteed to make using the iPad 3 a much better experience. The question here is what will scaled up 1080p video look like on this 3.1 megapixel screen? As the screen pixel dimensions (2048×1536) are much larger than 720p (1280×720) or 1080p (1920×1080), and the screen is squarer than HDTV (the iPad 3 is 4:3, HDTV is 16:9) this means that even to fit the 1080p/720p video from side to side it must be scaled up, and even more so if it’s zoomed in to fit the entire screen. If not scaled properly the picture can look soft, typically to counteract this images are sharpened, but if they’re not sharpened correctly compression artifacts can be pronounced. Furthermore as 1080p and 720p video is 16:9, and the iPad 3 is still 4:3 an unzoomed video will play in letterbox, with black bars across the top and bottom of the screen. This is the same as it’s always been with past iPads, zooming in most likely won’t hurt the experience of the film you’re watching, and the 4:3 aspect ratio is better for surfing the web so the trade-off seems worth it. The flash drives sizes are the same, 16GB, 32GB and 64GB. For video the 32GB and 64GB are best, but they are $100 to $200 more than the base 16GB model that’s already $500 for Wi-Fi only. There have been no other major improvements for the iTunes store (except for 1080p content) or how you interact with the device to watch video. iCloud supports movies as well so you can stream of download to all of your devices when you make a purchase. The battery life is still an amazing 10 hours, so there’s plenty of time to watch a few flicks before needing a recharge.

Here’s a few other points: 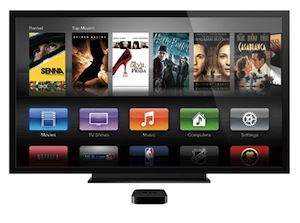 Now onto the Apple TV 3. This is really just Apple playing catch-up to Roku once again. Even the new interface is a little more Roku like. With that being said the new interface (which is also available as an update for Apple TV 2’s) is far too weak to really tout as anything ground breaking. 1080p video is a nice addition, but hardly a reason to upgrade from an Apple TV 2 to an Apple TV 3. Honestly 1080p is overrated, unless you’re projecting an incredibly large image. The digital cinema 2k standard for projecting images in a movie theater is only 1998×1080 (1.85:1 aspect ratio) so it’s easy to see how that’s overkill for a smaller home theater or television screen. Why high resolution works so well on the iPad 3 and computer monitors is the proximity of those screens to your eyes. 720p is perfectly fine for the majority of situations in the home, and most people probably can’t even distinguish between 1080p and 720p (hell some people are happy with scaled up DVDs rather than more expensive Blu-Rays). Apple TV now also supports iCloud for streaming your purchases to. The biggest difference between this device and the Roku is processor power, but Apple doesn’t put it to any good use. The most expensive Roku is actually starting to double as a gaming machine, with a Wii-like remote and a free version of Angry Birds the Roku is set to be a better experience than the Apple TV. Not to mention how stingy Apple is being with allowing people to create channels and apps for their box, whereas Roku has only encouraged development and has hundreds of channels and apps. With so many channels available (including several free movie streaming services), the Roku is still my favorite choice for a cheap Internet streaming video box.

Check out the new Apple TV interface in action below: