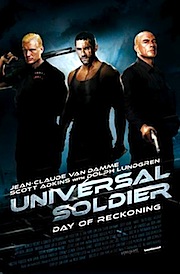 Director/writer John Hymas (son of famed director Peter Hyams) has really taken over the Universal Soldier franchise with his second run in the director’s chair with this action brand (his first was the third installment Universal Soldier: Regeneration). Again Jean-Claude Van Damme and Dolph Lundgren are returning, this time with Scott Adkins. The timing of the release of this trailer is no accident as all three are in The Expendables 2, which is set to release this Friday, August 17.
“
In Universal Soldier: Day of Reckoning, surviving Unisols Luc Deveraux (Jean-Claude Van Damme) and Andrew Scott (Dolph Lundgren) must battle anarchy and build a new order ruled by Unisols without government oversight. They are weeding out the weak and constantly testing their strongest warriors in brutal, life-and-death combat. Luc has emerged operating the Unisol Church of Eventualism, a self-help organization that takes in wayward Unisols whom the government has been secretly operating as remote-controlled sleeper agents. His mission is to liberate these Unisols from the implanted memories and the lies the government has inserted in them.

It looks like Adkins is playing one of these sleeper agents, and must travel to find Deveraux in order to discover why they did this to him. If you remember a while back we posted some odd pictures of JCVD from the set (also check out these pics), and now we know why he looked like part of the Insane Clown Posse. Deveraux is running a cult, and dressed the part.

The action looks great, this reminds me of straight to video 90’s fare, and Adkins has a great fan base for these types of flicks so his inclusion was smart. The fights also look cool, Adkins matches up against Dolph and Van Damme at what looks like separate points in the film. Lundgren gets an “and” in his title, so I imagine he’s only making a small appearance here, which is unfortunate but I’m sure he steals a scene or two as always.

Curiously the film is the first in the series to be shot and released in 3D. Universal Soldier: Day of Reckoning will be available on Video On Demand October 25, 2012 and then in a limited theatrical run on November 30, 2012.

We’re in for the Night EP:6 – Podcast