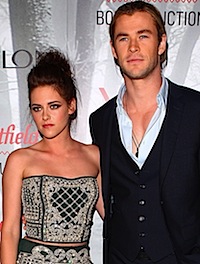 SHEEEEE’S BAAAAAACK!!! Well, maybe. Deadline is reporting that Universal is now denying The Hollywood Reporter report on Kristen Stewart being kicked off the Snow White and the Huntsman sequel. This is why reporting on hearsay crap that other outlets are saying gets us into trouble. But this one was too juicy to pass up.
“
Universal Co-Chairman Donna Langley: “We are extremely proud of Snow White And The Huntsman and we’re currently exploring all options to continue the franchise. Any reports that Kristen Stewart has been dropped are false.”

David Koepp is still not writing the sequel, which Universal still has not solidified any plans on how to go about creating. The Huntsman spin-off is one choice still on the table. As I said in my earlier article Chris Hemsworth is a rising star. In all honesty I think it’s the best move the studio has. Hemsworth will be a star and a box office draw at some point, while Stewart’s box office power is still somewhat in question.

And what of SWATH director Rupert Sanders? His job appears to be pretty safe with Universal buying the rights to a project about Dean Unkefer book 90 Church: The True Story Of The Narcotics Squad From Hell. Sanders will be working with SWATH producers Joe Roth and Palak Patel on this, so he’s already dug his boots in deep enough to save himself.

No word yet about this dispute on The Hollywood Reporter site.