Something is nesting inside the top floor of the Chrysler building high above New York City. The winged serpent of the title has chosen the famous landmark as the birth place for her offspring, the motherly instincts of the flying killer come to life as she hunts prey for food and viciously defends her egg. This is no ordinary prehistoric reptile, Quetzalcoatl as its know to the ancient Aztecs, is a worshiped God protected by an underground sect. Though it’s hard to imagine the giant lizard not being noticed as she dines on sunbathers and other unlucky rooftop dwellers.

Michael Moriarty plays Jimmy Quinn, an ex-junkie and perennial loser who stumbles upon the lizard and the secrets surrounding a series of human sacrifices. Quinn lures his enemies to the bird’s lair and employs the creature to eat a group of thugs threatening his life. A pair of homicide detectives (David Carradine and Richard Roundtree) are assigned to find out if there is any validity to the outrageous claims being made by Quinn. Sensing an opportunity to profit, Quinn refuses to lead the detectives to Q’s nest unless he receives a million dollars in reward money.

Q is the kind of movie that Roger Corman has been specializing in for years, it has a zany plot and some serious off the wall moments courtesy of the increasingly erratic performance from Moriarty. Though the plot is standard creature feature B-movie fare, the film is too self-serious to truly be viewed as tongue-in-cheek. The script could have used some more humor and less or Moriarty sulking around New York. While everyone else is playing to a certain genre level, Moriarty’s instance on bringing pathos to a cardboard character is commendable and unnerving, yet ultimately too heavy for the material to support. 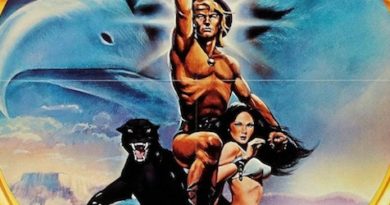