The Bodyguard may seem dated and rather ordinary today but back in the time of its release it was a colossal blockbuster. Costner coming off a string of critical and commercial successes is the bodyguard of the title Frank Framer, a role that was originated for Steve McQueen before his passing, and he is tasked with protecting a beautiful, ultra famous pop star. The singer, Rachel Marrron (Whitney Houston) is initially unaware that she is receiving death threats and that recently someone has broken into her mansion and self-satisfied themselves on her bed. Rachel resents the overly cautious Frank and his constant meddling in her established routines. Before long the two are thrust into a romantic relationship that will test the boundaries of their care for one another.

Lawrence Kasdan’s screenplay penned nearly a decade before the film arrived onscreen feels like a throwback with the macho former secret serviceman,who is not only the fastest draw in the room but also the quickest minded. Costner is superbly cast in the role and his pairing with Houston in her screen debut works very well. Yet the love story is rather flat. After a brief romantic interlude the duo decides to cool things due to professionalism, but Rachel acts like a petulant child and places herself in danger just to get back at Frank. For a movie with one of the most iconic love songs ever recorded as its theme, I was frankly surprised to realize that The Bodyguard is more action-oriented than romance-driven.

That’s not a knock on the picture, I found the action scenes to be effective and well executed on a technical level. The movie runs for a little over two hours but it feels rushed, like the creative forces behind the scenes weren’t entirely sure how audiences would react to an interracial love story featuring two super-stars. So in an effort to hedge their bets the studio presumably decided to punch up the shoot-outs and car chases and make the stalker a slightly less maniacal version of Hannibal Lecture.

I really enjoyed a lot of The Bodyguard, in fact I guess my base complaint is that I wish the film was longer so that it had time to breath and let these two main characters make plausible adult decisions, instead of simply being driven by plot mechanics. Still, the film is worthy of a recommendation because of the solid work by its leads, sure-handed writing from the venerable Lawrence Kasdan and that damn song, you know the one I’m talking about. 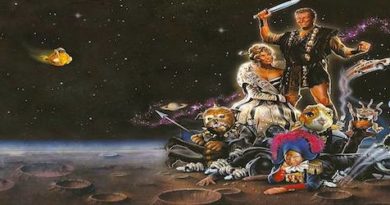