The second film in the wistfully intended series from Cannon film’s featuring H. Rider Haggard’s literary hero Allan Quartermain is a dreary and virtually unwatchable affair. None of the zany energy, humor, stunts, or overall filmmaking work in this cinematic wasteland. Shot concurrently with King Solomon’s Mines, this follow-up is among the worst titles in the not particularly distinguished Cannon filmography. Sharing the same ineptitude as the similarly goofy, boring and weak Firewalker, City of Gold does nothing but guarantee a quick ending to the series.

Back and far more annoying than previously is Sharon Stone and Richard Chamberlain as the now engaged couple, Allan Quartermain and Jessie Huston. While arguing over marriage locations, a man with walking fever enters their compound and spouts gibberish about the location of a Golden City and the whereabouts of Quartermain’s brother, Robeson. So the bickering hero and his bride-to-be set off aided on their quest by a holy man named Swarma (Robert Donner), and Umslopogaas (James Earl Jones) a Zulu warrior adept with a battle-axe. Jones is the only one who brings a touch of professionalism to the show, he can spout a line such as “Who craves the first taste of cool steel?” and not sound ridiculous.

Speaking of ridiculous, the dishonor of most ridiculous goes to the Razzie level job turned in by villain Henry Silva. Decked out in a heinous frizzy wig and outlandish purple wardrobe Silva’s evil high priest Agon snarls and glares his way through the picture.

The credits list Gary Nelson as director, but the film has been assembled rather than organized. Shots against green screens are horrendous as are the use of miniatures and dubious floorboard partings. Look for several shots during the finale where the wires are clearly visible for stunt performers. Allan Quartermain and the Lost City of Gold has been filmed and released but it’s not in completed form, the final product is so laughably bad that it would make a great drinking-game, if it weren’t sure to induce a state of comatose. 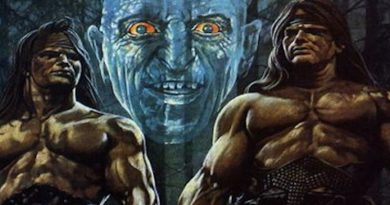