Army of One aka Joshua Tree has been directed by acclaimed stunt coordinator Vic Armstrong. After nearly two decades this veteran second unit director steps up and delivers a ‘car’ movie, heavy on stunts, chases, and shoot-outs. The most famous ‘car’ flick is probably Smokey and the Bandit, though Bullet, Fast & Furious, and Gone in 60 Seconds are notable genre entries. Army of One successfully uses elements from each picture in crafting its own style, resulting in an undeniable guilty pleasure.

Wellman Santee (Dolph Lundgren) is a former race car driver, now earning a living as a transporter of exotic sports cars for the Chinese mafia. Santee and his partner Eddie are en route with the super-charged cars when they are pulled over by a highway patrolman, a shoot-out ensues resulting in the death of Eddie and the officer. Santee is jailed for the cop’s murder and held in a high security prison.

While being transferred to a different facility an attempt is made on the convict’s life. He narrowly escapes the assassination attempt and evades the authorities. Wandering the California desert landscape he stumbles upon a roadside diner, there he steals a truck, kidnaps the owner, Rita (Kristian Alfonso) and flees the scene. Unbeknownst to Santee is that his hostage is a deputy sheriff.

The pair is pursued by the crazed and vengeful Lt. Severance (George Segal). The convict and his prisoner lead the cops on a high-speed chase, from the dirt trails of Joshua Tree through the streets of Los Angeles. The only hope for clearing his name is in the form of a nosy small town law officer (Geoffrey Lewis).

George Segal seems to be having a ball, spouting curse words at an alarming rate and generally chewing up the scenery. Lundgren is satisfactory in a similar role to Charlie Sheen’s in The Chase. Stunner Kristian Alfonso is the gorgeous love-interest, she resembles Cindy Crawford and her throw-down abilities seem genuine. The 106 minute running-time is a bit problematic, pacing issues threaten to bog the last third down in monotony, but the final action sequence delivers the goods. Army of One is a solid early nineties effort from the Swedish beefcake. 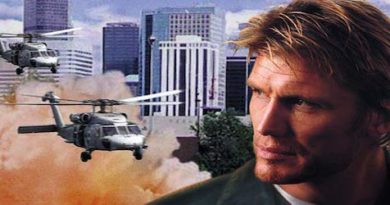