The ill-tempered sardonic feline, made popular by internet memes, gets her own live-action flick courtesy of the Lifetime network. Featuring the dour animal of the title, whose perpetual frown and dour thoughts are voiced by actress Aubrey Plaza, going through a holiday themed melodrama with ample doses of humor to amuse the majority of the star’s 6 million social media followers. Written and directed by Tim Hill with collaborator Jeff Morris, Grumpy Cat’s Worst Christmas Ever liberally borrows from Home Alone, Look Who’s Talking and the Beethoven flicks. Surprisingly, all these elements work in the film’s favor, resulting in an impressive presentation for the sometimes less than astute network.

Grump Cat resides in a pet shop located within a shopping mall, she is a dour little creature with no affinity for the other animals in the store or the humans who frequent the shop. Facing foreclosure from the bank, the owner of the business must sell a prized breed of dog to come up with the cash to save the place. The beautiful canine becomes a local news-story, it also attracts the attention of two bumbling musicians/thieves. Their plan to steal the dog and resell the animal is thwarted by a spunky pre-teen girl.

Chrystal (Megan Charpentier) is bummed for the holidays. She has no friends at school and the mean girls shun here at every turn. Distraught and near tears Chrystal meets a mall Santa (Russell Peters), who gives her a magic wish. The girl asks for a true friend for christmas, the wish manifests itself in the form of hearing the voice of Grumpy. In a series of coincidences, the child and her new friend thwart the criminals plans while locked in the expansive mall after-hours.

The plot points are not important in a movie like this, the attitude and style are paramount. I was consistently amused at the level of energy, self-deprecation, and humor in that was present on-screen. Director Tim Hill has been responsible for the Spongebob Squarepants movie and the Easter set Hop, both of which share the same irreverent humor as Grumpy Cat. I imagine that Lifetime will see good viewership numbers with this original production, enough so that follow-ups should be in short order. That’s nothing to be grumpy over. 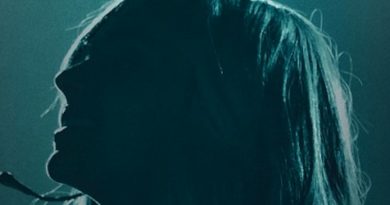