Director\Writer David Twohy’s second attempt at recreating the thrilling experience of his 1999 cult classic Pitch Black, is alternately better and worse than 2004s big-budget flop (and guilty pleasure) The Chronicles of Riddick. This latest sequel simply titled Riddick is besieged with an entirely different set of problems than the larger scale second entry into what has now inexplicably become a trilogy. If Chronicles veered into bad Shakespeare territory, Riddick is content borrowing elements from Conan, I am Legend, and Aliens. This makes for a very uneven viewing experience and the movie, while containing some strong individual scenes, never gels as a whole story.

The story’s first thirty minutes are focused squarely on Richard B. Riddick. The bloodthirsty savage who became king of a religious sect known as the Necromongers. Now, exiled to a harsh deserted planet and left for dead, Riddick must survive the hostile environment and it’s unnatural predators both human and non-human. This leads to an unlikely alliance with a dingo-dog that Riddick raises from pup to sole companion.

After stumbling upon a former outpost, Riddick signals his presence to bounty hunters in the neighboring region. He figures this will be like hailing a cab off the desolate rock planet. Two competing bands of mercenaries arrive looking for the notorious outlaw and the high reward that comes with his capture. So, the second act or rather an hour of the film is taken up by the cat and mouse game between the hunters and the hunted.

Then, late in the game Riddick turns himself over in order to gain shelter from the ensuing attack by a hive of marauding aliens. The last third of the flick is dedicated to the picking off of characters one by one until the predictable finale in which our cunning bandit escapes unharmed to populate further sequels.

This series start so brilliantly with Pitch Black before descending into guilty pleasure territory with the follow-up Chronicles. Now, the simply titled Riddick is a mash-up of all the elements that have come before but are far less effective this time around. Series creator David Twohy’s best work remains the original Pitch Black and The Arrival. 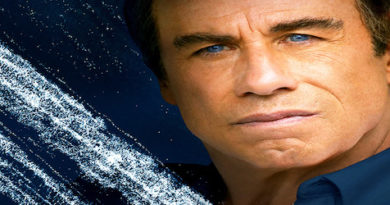