Fanboys and websites love to debate about the worst comic book movie ever made. Often times Batman & Robin, Elektra and Fantastic Four are cited as the worst cinematic representation of our illustrated superheroes. But Steel is by far the most inept, poorly produced, and plain boring of all the DC or Marvel properties that have graced the silver screen thus far. Based on a little known character from the pages of the Superman mythos, Steel has been removed from his comic book storyline, given a new origin story, and a fabricated antagonist.

For all his basketball skills Shaquille O’Neal is a lumbering presence, inarticulate and ungraceful. O’Neal is outfitted in a silly costume and zips around on a motor bike, while attempting to stop local gangs from using military-grade weapons in a crime-wave. Written by director Kenneth Johnson the film is slow to start, it’s nearly 45 minutes before Shaq appears as the title character. An inane subplot that concerns a recovering paralyzed veteran, and another that follows Steel’s younger brother Martin (Ray J) involvement with a crew of local hoods.

Steel has an obnoxious need for urban relevancy. This is an innocuous mix of superhero film and inner-city message movie. A good performance from Annabeth Gish is wasted in this corny tale that serves as only as a trivia question–name the ‘other’ Shaq movie. Judd Nelson, Richard Roundtree and Irma P. Hall all stop bye for quick mortgage payments. 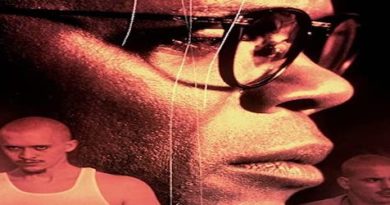