American “name stars” dominate the marketing materials, but Outcast is actually a foreign production designed to entice western viewers into thinking they are watching a domestic film. That misconception is quickly cleared up as the film reveals it’s true intentions. On it’s own modest terms Outcast is competently mounted and executed. The story is a derivative mix of elements from other movies and for long stretches Nicolas Cage (2nd billed) is totally absent from the movie. Star Wars alumnus Hayden Christensen is again cast as a petulant, cranky, immature knight, who must go on a journey that will change him in some way.

When the heir of the Imperial throne becomes the target of an assassination by his despised older brother, the young prince must flee the kingdom and seek protection. His only hope for survival is in the form of help from a former Crusader (Hayden Christensen). As they continually avoid close run-ins with the King’s Guard, the prince and Crusader pick up fellow outcasts and form a family unit. Can the once decorated solider get past his trauma and see that his boy companion is proclaimed King?

Outcast is a lot more enjoyable than the Matt Damon lead film, The Great Wall. Both feature Caucasian males headlining Chinese produced movies, but Outcast flows better and isn’t too hung up on the melodramatic elements of the story. Director Nick Powell (a former stunt professional) shows his adeptness at staging combat, and also shows an eye for composition, displaying a assured visual style. The biggest let down in Outcast is the under-use of Cage, sporting a wild hairstyle and mannered English accent, playing a mentor figure to Christensen. The movie would have benefited from more scenes between the two leads and less time developing a bond between former Crusader and future King. 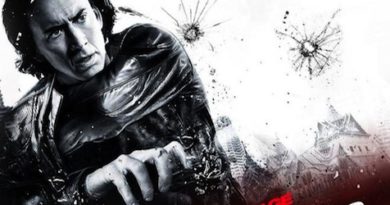