Internationally recognized action icon Dolph Lundgren has appeared in 40 films over a career spanning 26 years. After making his debut in ‘Rocky IV’ as the villainous Ivan Drago, Lundgren has gone on to portray such beloved characters as ‘He-Man’ and ‘The Punisher’. His recent role in ‘The Expendables‘ reunited him with long time friend and on-screen rival Sylvester Stallone. Dolph Lundgren has directed six feature films, the latest being ‘The Killing Machine’, available now on DVD. 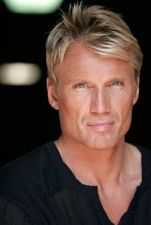 Jason: Now that you’re an accomplished director, in addition to being an actor, is it difficult to be directed by someone else? Or do you enjoy the break from all the responsibility?

Dolph Lundgren: Actually it’s a pleasure, less work. You can always pick up stuff, you watch with different eyes then when you’re acting. If you haven’t directed you’re not aware of the mechanics of how it’s all put together. When you’ve directed you get ideas of camera placement and lighting, and you watch the whole show. It’s kind of relaxing to able to just ‘act’. So I’m doing a couple of supporting roles in a few movies just to act a bit and have fun with it. (read our review of Command Performance)

J: You’ve previously stated that you’re developing a project titled ‘Skin Trade’ in which you would play a secondary role and direct. Is this still in the pipeline?

DL: Yes very much so. I’m trying to put that together and I’m talking to a couple of actors right now. I hope to get that together this year. I’m doing a couple of new movies over the next few months here, smaller roles as I said, and then there is ‘The Expendables 2’ which is coming up. In between all that I’m trying to work in ‘Skin Trade’. I would be playing a supporting role and directing, sort of throwing the ‘big job’ [Leading Role] on somebody else.

J: Were you always planning to one day step into directing?

DL: My whole career I have just gone with the flow. I had no long term plan, remember, I didn’t become an actor until I was 23. I knew that I had it in me as a kid because I did some plays in junior high, but I didn’t really set my mind to it until I was in my mid-20s. Directing came about the same way, 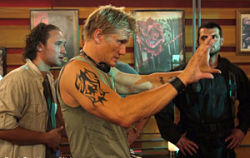 I was going to star in a picture and the director [Sidney J. Furie] got sick. He recommended me for director, which I was a bit surprised by, and so were the producers. I had done some script work with him and I guess he saw that I had a talent. Now thinking back I was always interested in multimedia stuff like music, clothing, writing, and also films of course. I suppose becoming a director has been a natural progression, but it wasn’t until about five years ago that I started thinking about it seriously.

J: Throughout your career you’ve flip-flopped between hero and villain. Do you have a preference, from an actor’s standpoint, in portraying the protagonist or antagonist?

DL: I suppose it’s more fun to play someone a little dark, for me. I enjoy playing the darker shade in a character, either in a lead or co-lead. Somehow if it’s just a regular hero, whatever that is anyway, it is more difficult to make that character interesting. It seems to me, and I just discovered this recently while trying to analyze it a bit more, if the character has a dark side, some inner pain, or something that they’re trying to get through, it’s easier for me to identify with it and do a good job. (read our review of Red Scorpion)

J: When you look over your filmography do you think of each film as if were your child? Do you care for them all equally? Or do you have personal favorites?

DL: Obviously some stand out more than others. I have fun with all of them. Sometimes the ones that didn’t turn out the way you had hoped create better memories. There may have been some problems on the set, or conflicts during the shoot, and it can actually be a little more memorable. You go through life and sometimes the character matches your life in some way or form, or you find the right director, who can see something in you that you can’t. Some stand out more than others that’s for sure.

J: What can you tell us about your fitness book due for release this year? 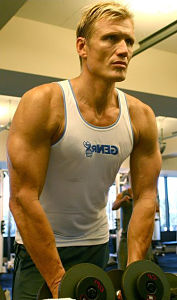 DL: It will be released initially in Sweden. I decided to do it in Swedish because it’s somewhat autobiographical to some extent. However the publishers want to shop it to the big territories, America, France, and Spain. I’m still working at putting the finishing touches on it. It’s coming out fall 2011 in Sweden, and then hopefully America next year.

J: Will it have details involving your workout regimen?

DL: Yes, it tracks my life. How and why I started training, my experiences in the martial arts, and how that got me into the movies. Information on how I changed my routines depending on the films I did, starting with ‘Rocky IV’, all the way up through ‘The Expendables’. I’m paralleling my personal growth to my training. The title is ‘Fit Forever’, so the idea is how to keep it going.

J: When do you feel you looked your best physically on-screen? 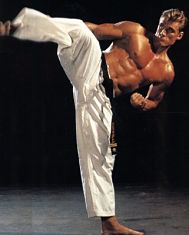 DL:Physically ‘Rocky IV’ was very special. We didn’t use any doubles, there was no CGI, and you couldn’t augment anything. We just had to be in great shape, and both Sly [Stallone] and I were. I did a film called ‘Pentathlon’, I played an athlete which was fun because I was less bulky and a little leaner. The modern pentathlon is swimming, shooting, fencing, running, and horse-back riding, that was the way I use to look before I got into movies. A little more athletic and leaner. I enjoyed ‘The Expendables’ too, even though I didn’t take my shirt off, I had to bulk up a bit because I was surrounded by guys like ‘Stone Cold’ Steve Austin and a few boys that aren’t exactly small. In cinema today there aren’t that many big guys around, but in that film we had a bunch.

J: Recently some footage surfaced of you and Stallone in Mexico. Internet speculation was that you were location scouting for ‘Expendables 2’. Can you comment on this?

DL: Ya, we were scouting a couple of locations, but I don’t think it will be shot there for whatever reasons. Though It will be filmed on multiple locations in France, China, and Ukraine. I’m not 100% sure when it will happen because Stallone is doing a couple of movies and I have a few other movies, but I’ll find out in the next couple of weeks.

J: Will your character Gunner Jensen be appearing in the sequel?

DL: As far as I know yes, but I haven’t signed anything yet. [laughs]

J: Were you ever approached by Stallone to reprise your role of Ivan Drago for a cameo in ‘Rocky Balboa’?

I think that was just a rumor. I have always been grateful towards Stallone for giving me my shot in ‘Rocky IV’, and then again in ‘The Expendables’. Anytime he wanted to use footage of Ivan Drago, that was fine with me. As far as reappearing as the actual character, that was something I never heard about.

J: You’re credited with writing and co-writing five films. Do you enjoy the process?

DL: I do like writing, it’s a very lonely craft. You have to get into a zone. Writing helps with directing because you know the story inside and out and you can change things. That is where Stallone got his start. (read our review of Missionary Man)

J: In early drafts of ‘The Expendables’ script your character was a clear-cut drug addict and psychopath. Was it a conscious decision to scale the character back?

DL: The original drafts were good, my character was a loose cannon

a little more out there, but I think Stallone made the right decision by pulling him back a little. Some of it was cut out before it was shot, you kind of understood that he maybe had problems with drugs, but you weren’t sure. You never saw the guy use in the movie, I think that it made him easier to forgive. In the long term, I think it was a good choice.

J: Your films have enjoyed longevity on DVD and cable television. When I catch one on T.V. my afternoon plans are shot. Do you ever stop and watch one when flipping through the channels?

DL: I don’t really like watching my own movies. I have two daughters, 10 and 15, 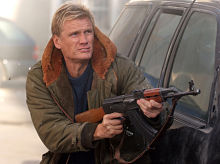 , and until recently they haven’t been old enough to watch the ‘blood- baths’ that I’ve been in. I’ve kept that away from them. Sometimes I’ll catch one of my movies on TV, and with time, you kind of mellow and think… ‘wow that was fun’! When it’s too recent or close to having been shot, you tend to be more self-conscious of your own work. I’m no fan of my movies. I think they are out there for other people to decide.

J: What can fans expect next from Dolph Lundgren?

DL: I have a couple of films that I’m going to be doing, one is with Cuba Gooding Jr. I want to do more colorful characters because I really enjoyed ‘The Expendables’, I want to have a little fun. I was trying to find roles that were a little more off beat and fascinating to me as an actor, to do more challenging stuff. ‘Universal Soldiers 4’ is coming up, I’ll be back in that doing a guest show. I’m actually looking at doing a comedy, if you can believe, it’ll be a direct comedy, small indie film. After that, ‘Skin Trade’ or ‘Expendables 2’.