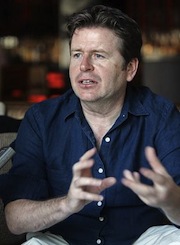 Deadline Hollywood got the scoop that Simon West has been chosen to direct The Expendables sequel. A lot of people were guessing that Stallone would come back and direct number two as he did the first, but seeing that he’s signed on as the lead in Bullet to the Head (formerly Headshot) which is shooting right before The Expendables 2 there’s no way he could get all the pre-production done on time to start shooting in the next few months.

West is no stranger to the action genre having directed 2011’s remake of the The Mechanic, Lara Croft: Tomb Raider and Con Air. It’ll be interesting to see the world of The Expendables through another set of eyes. What do you think of this choice?

This Week in Movies: Episode 1