There are those Christmas movies that have stood the test of time to become known as classics. These films can be watched every year without any wear or ever losing their touching moments. Take a look at this list of the five best Christmas classics. Have you seen them all? 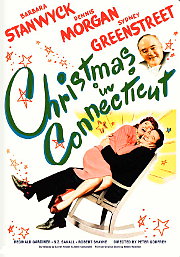 War hero Dennis Morgan becomes the object of a publicity stunt staged by magazine publisher Sidney Greenstreet. The corpulent print mogul announces that Morgan has won a Christmas dinner, to be prepared by the magazine’s housekeeping expert Barbara Stanwyck in her own Connecticut home. The catch: Not only does Stanwyck not have a home in Connecticut, but she’s never been in a kitchen in her life! She also doesn’t have a husband (as her articles claim), so Stanwyck’s erstwhile beau Reginald Gardiner is pressed into service as the hubby. As for the cooking, that will be handled by master chef S. Z. “Cuddles” Sakall. This solves everything, right? No way, Jose. Long dismissed as a lesser film farce, Christmas in Connecticut has its own irresistible charm, and has in recent years become a perennial Christmas TV attraction. 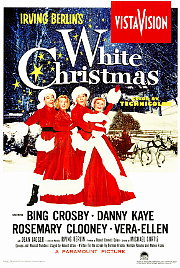 Bing Crosby and Danny Kaye (replacing an ailing Donald O’Connor) play nightclub entertainers Bob Wallace and Phil Davis, while Rosemary Clooney and Vera-Ellen are cast as singing-sister act Betty and Judy. The foursome travel to Vermont to visit Bob and Phil’s WII commanding officer, General Waverly (Dean Jagger, who looks and sounds like Dwight D. Eisenhower!), who now runs a rustic old inn. Discovering that the general is in dire financial straits, the four entertainers secretly make plans to bail the old guy out with a big musical show, enlisting the aid of Bob and Phil’s army buddies. Corny in the extreme, White Christmas evidently struck a responsive note with film fans; it was the high-grossing picture of 1954, and a decade later proved to be a ratings bonanza when it was given its network-TV premiere. 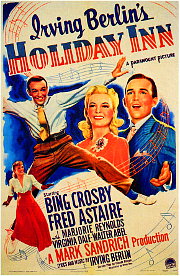 Bing Crosby and Fred Astaire star in Holiday Inn as a popular nightclub song-and-dance team. When his heart is broken by his girlfriend, Crosby decides to retire from the hustle-bustle of big city showbiz. He purchases a rustic New England farm and converts it to an inn, which he opens to the public (floor show and all) only on holidays. This barely logical plot device allows ample space for a steady flow of Irving Berlin holiday songs (including an incredible blackface number in honor of Lincoln’s Birthday). Oddly enough, the most memorable song in the bunch, the Oscar-winning White Christmas, is not offered as a production number but as a simple ballad sung by Crosby to an audience of one: leading lady Marjorie Reynolds. Fred Astaire’s best moment is his Fourth of July firecracker dance. Ah, but what about the plot? Well, it seems that Astaire wants to make a film about Crosby’s inn, starring their mutual discovery Reynolds. Bing briefly loses Reynolds to Astaire, but wins her back during the filming of a musical number on a Hollywood soundstage (eleven years earlier, Bing enjoyed a final clinch with Marion Davies under surprisingly similar conditions in Going Hollywood). As with most of Irving Berlin’s “portfolio” musicals of the 1940s, the song highlights of Holiday Inn are too numerous to mention. This delightful film is far superior to its unofficial 1954 remake, White Christmas. 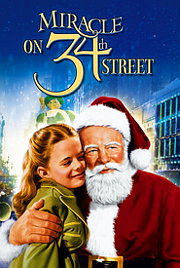 Edmund Gwenn plays Kris Kringle, a bearded old gent who is the living image of Santa Claus. Serving as a last-minute replacement for the drunken Santa who was to have led Macy’s Thanksgiving Parade, Kringle is offered a job as a Macy’s toy-department Santa. Supervisor Maureen O’Hara soon begins having second thoughts about hiring Kris: it’s bad enough that he is laboring under the delusion that he’s the genuine Saint Nick; but when he begins advising customers to shop elsewhere for toys that they can’t find at Macy’s, he’s gone too far! Amazingly, Mr. Macy (Harry Antrim) considers Kris’ shopping tips to be an excellent customer-service “gimmick,” and insists that the old fellow keep his job. A resident of a Long Island retirement home, Kris agrees to take a room with lawyer John Payne during the Christmas season. It happens that Payne is sweet on O’Hara, and Kris subliminally hopes he can bring the two together. Kris is also desirous of winning over the divorced O’Hara’s little daughter Natalie Wood, who in her few years on earth has lost a lot of the Christmas spirit. Complications ensue when Porter Hall, Macy’s nasty in-house psychologist, arranges to have Kris locked up in Bellevue as a lunatic. Payne represents Kris at his sanity hearing, rocking the New York judicial system to its foundations by endeavoring to prove in court that Kris is, indeed, the real Santa Claus! 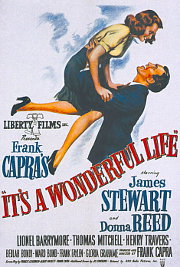 This is director Frank Capra’s classic bittersweet comedy/drama about George Bailey (James Stewart), the eternally-in-debt guiding force of a bank in the typical American small town of Bedford Falls. As the film opens, it’s Christmas Eve, 1946, and George, who has long considered himself a failure, faces financial ruin and arrest and is seriously contemplating suicide. High above Bedford Falls, two celestial voices discuss Bailey’s dilemma and decide to send down eternally bumbling angel Clarence Oddbody (Henry Travers), who after 200 years has yet to earn his wings, to help George out. But first, Clarence is given a crash course on George’s life, and the multitude of selfless acts he has performed: rescuing his younger brother from drowning, losing the hearing in his left ear in the process; enduring a beating rather than allow a grieving druggist (H.B. Warner) to deliver poison by mistake to an ailing child; foregoing college and a long-planned trip to Europe to keep the Bailey Building and Loan from letting its Depression-era customers down; and, most important, preventing town despot Potter (Lionel Barrymore) from taking over Bedford Mills and reducing its inhabitants to penury. Along the way, George has married his childhood sweetheart Mary (Donna Reed), who has stuck by him through thick and thin. But even the love of Mary and his children are insufficient when George, faced with an $8000 shortage in his books, becomes a likely candidate for prison thanks to the vengeful Potter. Bitterly, George declares that he wishes that he had never been born, and Clarence, hoping to teach George a lesson, shows him how different life would have been had he in fact never been born. After a nightmarish odyssey through a George Bailey-less Bedford Falls (now a glorified slum called Potterville), wherein none of his friends or family recognize him, George is made to realize how many lives he has touched, and helped, through his existence; and, just as Clarence had planned, George awakens to the fact that, despite all its deprivations, he has truly had a wonderful life. Capra’s first production through his newly-formed Liberty Films, It’s a Wonderful Life lost money in its original run, when it was percieved as a fairly downbeat view of small-town life. Only after it lapsed into the public domain in 1973 and became a Christmastime TV perennial did it don the mantle of a holiday classic.

Get These Classic Christmas Movies On Amazon